LEMONS IN THE GUTTER

Hollywood, summer 1968 and director Otto Preminger is shooting Skidoo, an alleged comedy about a retired gangster facing trouble from his mobster past---that is, until his daughter's hippie friends come to his rescue. Today a guilty pleasure for even the most hard-core of Preminger fans, Skidoo numbers among its many delights: Jackie Gleason on LSD, and Carol Channing singing a Harry Nilsson song about free love. Mr. and Mrs. Front Porch weren't ready for Skidoo back then. And they still aren't.

But while it was being made, Otto's folly offered several week's steady employment for a number of hippies hired as "atmosphere players." Among the film's principals was John Phillip Law of Barbarella ("Decrucify the angel or I'll melt your face") fame. He was one of the hunkiest male starlets of the era, and owned the house whose basement I was living in at the time. As natural selection would have it, Law happened to be dating one of the most beautiful females of the cinematic species, Barbara Parkins, fresh from her role in the immortal Valley of the Dolls. On a good day one might catch a glimpse of this ubercouple as they strolled about the grounds , hand in hand, stripped to their skivvies.

John Law's brother, Tom, had been hired on as Skidoo's hippie wrangler. Because of some sort of mineral deficiency or glitch in my DNA, I simply couldn't get my hair to "grow good in the back"; thus, I looked far too conventional to qualify as Hollywood's idea of a hippie and didn't make the cut. Nor, with his leading man looks, did my Genet-ish friend, Lucky; he was far too, well, Tom of Finland to evoke counter culture. But hirsute dozens of others did.

Each morning these fortunate ones congregated at dawn in front of John Law's to be picked up by a bus and driven to the Skidoo set in Valencia. Among the film's other stars was the towering Donyale Luna, one of those wonderful, crazy sixties people who was the prototype for all the black fashion goddesses who followed in her wake, i.e. Iman, Grace Jones, Naomi Campbell. Born in Detroit, educated in Switzerland with, so she claimed , "an IQ higher than Einstein's," Donyale left college at fourteen (" because it was bullshit"), went to New York where Vogue and Richard Avedon put her under contract and the rest is high fashion history. While working on the film, Donyale was put up at the (in) famous Chateau Marmont just down the hill from where we were living. It was fun to go to the Chateau ---forevermore identified as where John Belushi bought the farm-and listen to this space creature wax (and wane) on her philosophy of life and the secrets of the human heart. She possessed a rhetorical style not unlike ice princess chanteuse Nico, who, although she wasn't in Skidoo, should have been. And could have been, inasmuch as, during this period, she was hanging out in Hollywood (for reasons I've yet to figure out) with a group of sideburned Mafia types in Sy Devore suits.

With Nico and Donyale, it was difficult to know exactly where ingenuousness left off and the put-on began. They had other things in common: both had come to the big city, got taken up by the smartest fags in existence, and made into the flavor of the minute; both began as models before graduating to appearances in Fellini filmsNico in La Dolce Vita; Luna in Satyricon; and they came from backgrounds which they did their best to obfuscate. Alas, both died before their time. During Skidoo, Donyale and Nico spent a lot of time hanging out together at the Chateau. Oh, to have been the proverbial fly on the wall trying to decipher those mittel-Martian accents! I loved being at the Chateau of an evening after Skiddo had closed down for the day and listening to just plain "Luna" (as she was billed by Preminger) holding court. One night six or seven of us were there, and heaped around us on the floor were the hugest piles of grass I had ever seen. Donyale was just getting revved up--- "I came to Hollywood not to make films, but to come down off my mountain which is an estate more than half the size of New York City . . .I'm not a woman, I'm a black baby goddess ," etc., when at the door there came a knock, our hostess opened it and in trooped several of L.A. 's finest. Proceeding to stomp about the premises, they paid no attention whatsoever to the obvious piles of hemp, while all six feet (plus change) of Donyale brazenly stalked after them and, in her unforgettable faux European accent, bellowed baritone indignation in a manner vaguely reminiscent of the great '30s comedienne Lyda Roberti: "Bodju kawnt arrest heeem, thawt ees Pompa." Gesturing to Lucky, she continued, "Yewww kawnt arrest heeem, thawt ees. . .?" She couldn't remember Lucky's name. "What's his name?," she said soto voce to Pompa. "Lucky," Pompa whispered back She began again: "Yewww kawnt arrest heeem , thawt ees Lucky." The logic of which escaped me. Completing their curious perambulations about the room, the cops departed as unceremoniously as they had arrived. Shrugging our shoulders, we all stared at each other- --after all, these visiting officials could have sent us up the river big time for "possession." Then, it was back to business as usual. 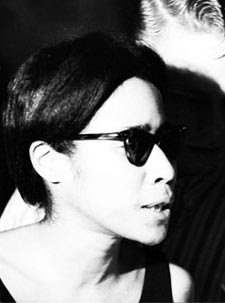