. . .stacks and stacks (well, not quite) of letters 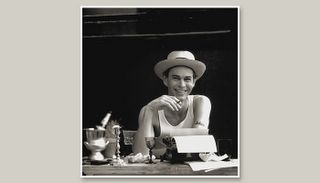 RC of NJ writes: I was at my local New Jersey Borders Books this weekend looking at some new Jazz Vocal CDs (6 or 7 of the 8 I was looking at didn't play when I scanned them on the listening station) and a thought struck me....When I was a kid back in the late 60s, the record shops had booths you could go in and the clerk would play a record for you so that you could listen to it to determine if you wanted to buy it. Even as recently as 5 or 6 years ago, I could go into a Borders and they would open up a CD and let you listen to it at the service desk. I seem to recall them putting up signs a few years ago saying that CDs could no longer be opened. Yes, many of the stores these days have listening stations that the customer can use to scan the CD and preview 25 to 30 seconds of the track, but forget evaluating the second CD in a box set and, quite often, the part of a song I wanted to hear is after the first 30 seconds. At what point (and why) did we give up our "right" to evaluate music before purchase? I can go into the car dealer and test drive a car, I can go into a real music store and usually try out some sheet music on the store piano, and there are many other businesses that let one "try before buyins..." However, I can't listen to CDs that don't scan on the listening stations in my book store to see if the music is any good! Most stores I know of have a no return policy on opened CDs as well. I know that this isn't that big of a deal, but it seems unfortunate that our options have decreased as time marches on. Cheers! RC
_______________________
To which, I replied:

I find that scanners work fairly well. There are stores in Tokyo---HMV in particular---with scanners that will read the barcodes of the majority of their stock and will play a CD in its entirety. I might be wrong about "entirety," though. Being unable to sample CDs is not so much a problem for me.

However. . .I date myself, but one of my major bete noirs (among many) is the increasing scarcity of album liner notes on the back that began long before the advent of CDs. Once upon a time one could pick up an LP by an artist who was an unknown quantity and secure enough info from the liners to convince you to purchase an album....without even auditing it! I did that once with a Jimmy Scott album long before his much-deserved comeback. The notes made his The Source seem so interesting that I bought it, even though I had never heard of Scott. Eventually, Jimmy and I became friends, but that's another story.

The liner note disappearance first began with rock music in the 60s. There was so much publicity "surround" with new rock recordings that liner notes were deemed extraneous. Plus, notes-free packaging was, graphics-wise, much cleaner and leaner looking. Eventually, this trend spread to other kinds of music. And now with CDs, it's an extra-generic moot point. I produce CDs for Japan, and nearly all of them have fairly extensive teeny tiny liner notes on the outside in English.

On the forthcoming Foreign Affair by singer Lincoln Briney, due out Aug. 29, for which I am the associate producer, the above photo (with the cig airbrushed out inasmuch as he is no longer a smoker) is on the back along with the following text (note tattoo on his left arm): "Sometine in the early 90s I was performing a lot of Jobim's repertoire live. The word of his death had such an impact on me that I guess I felt a tattoo fitting. Seemed silly to some, but not to me. Anyway I went to great lengths to find the right font for his name. I suppose I was trying to hang on to his legacy in some way. Later that year 'Antonio Carlos Jobim Airport' was named in Rio. Now, every time I am 'sleeveless' I am prepared to answer the question, "Who's Jobim?' I get to tell them. It's funny, but everyone can launch right into 'The Girl from Ipanema.'"

Perhaps intriguing enough in and of itself to engender a purchase. That, plus the presence of master jazz guitarist Bill Frisell along with a songbag of mindboggling eccclectic proportions, i.e. Sade, Jobim, Bonfa, Matt Dennis, Tom Waits, Stevie Wonder, Ron Sexsmith, Falcao, Alec Wilder, et al.

Some of the aforementioned CDs that I've produced contain font on the back that is so small you practically need a magnifying glass to read it. But by crackies I want my liner notes! Best, Bill
Posted by Bill Reed at 8:43 AM