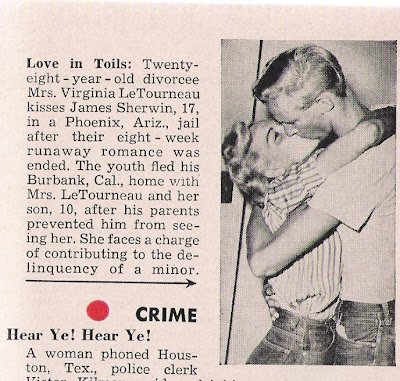 The Return of Cat Blog Friday 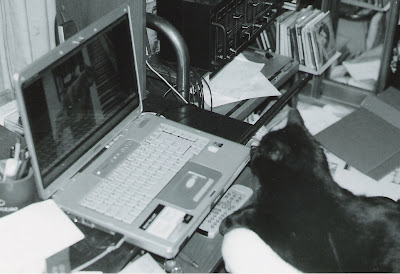 Kuro joins the other 2,549,927 others who've watched Nora, The Piano-Playing Cat on Youtube 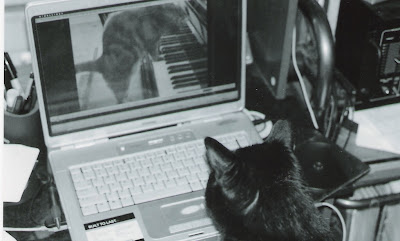 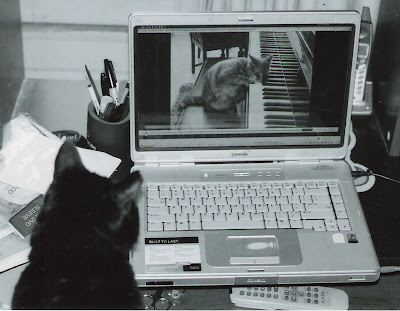 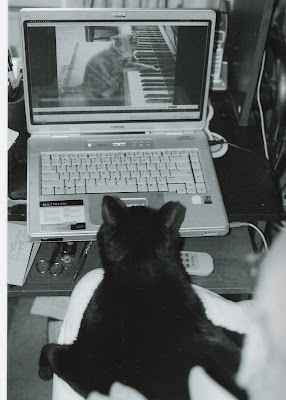 photos by David Ehrenstein
Posted by Bill Reed at 3:28 PM No comments:

I don't just sit around chewing gum, filing my nails, reading comic books, and listening to jazz records all day. Although it sometimes hurts my head to do so, I occasionally think about more serious stuff. Such as. . .the VT Massacre.

In an act tantamount to phoning up his publicist, the shooter, whose parents allegedly immigrated from South Korea in 1992 in search of a better life (some life, hunh?), contacted NBC via mail twixt his two grand guignol tableaux. Clearly, he had investigated all avenues of approach and came to the conclusion that the Peacock Net would be the most likely to take the low road and air his pornographically violent video rants. In that, he demonstrated a rare moment of lucidity and common sense of sorts. Yesterday there were already some thirty fledgling copycat incidents reported on various high school and college campuses around the nation. Thanks, NBC!

Q. Tell us Dr. Chilledair, is there anything we can take away from all of this, anything we
can. . .?

A. Repeal the second ammendment. And while we're at it, get rid of video games and rap (notice that I didn't call it rap music).

Try saying snarky about Lawrence Welk to most schooled musicians and you will most likely be firmly but gently upbraided. Most players of my acquaintance---even the hippest among them (no names please)---praise Welk for the musicianship of his players, if for nothing else. The best in the biz.

It is inarguable that Welk's is now the single best regularly scheduled music program on TV. It also happens to be the ONLY regularly-skedded show on the box, but that is another issue.

As for the Johnny Hodges/Welk album, oft-noted as a signifier of Welk's ultimate with-it-ness, most of the arrangements were by the ultra-hip likes of Benny Carter and Marty Paich, so it's not quite representative of Welk. Nonetheless, the latter had a perfectly fine battery of arrangers at his disposal.

Never thought I'd come to see the day when I would say this. but Welk is missed. If for no other reason than supplying pluperfect satiric fodder for Stan Freberg. pt 1 , pt. 2 (Windows Media Player required)
Posted by Bill Reed at 11:11 AM No comments:

I Never Have To Blog Again 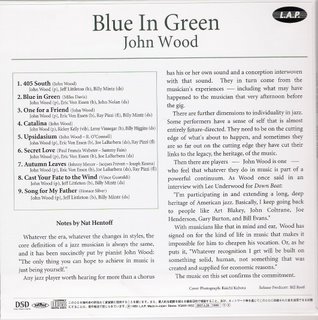 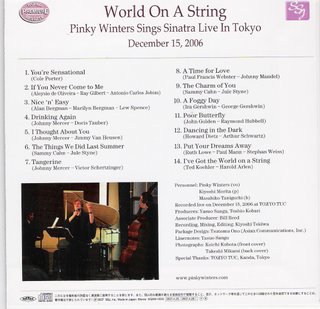 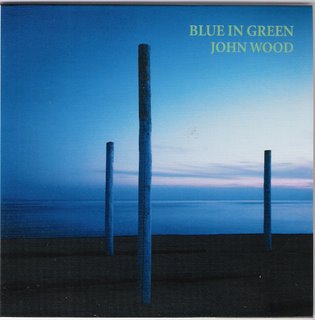 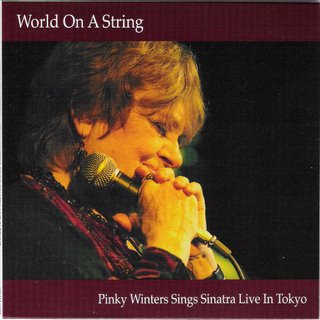 The Perils of Spring Housecleaning 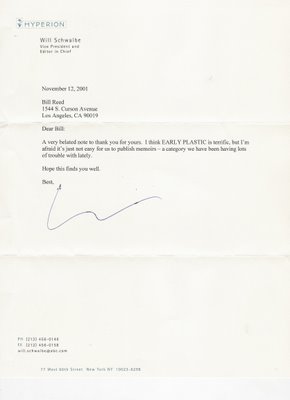 While doing so just now, I excavated this. Gakkkk! Where in godz name is Max Perkins when you need him?
Posted by Bill Reed at 11:57 AM No comments:

Michael Buble doesn't need me to defend him, but from all the negative remarks about him on last week's American Idol, I was expecting something far worse. I just now took a look at the clip on youtube, and while he's a bit---if you will--- "pitchy" and not in very good voice that night, it's not like he's Wayne Newton ferkrisakes. (However, that attitudinous twitchy Elvis upper lip has gotta go.)

As for Buble's primetime remark about "steal your parents' credit cards" on AI, that almost exact same statement got the great Soupy Sales kicked off of daytime TV back in the sixties! So I guess Michael's not exactly the sharpest knife in the drawer. But I like his singing. He has a nice smoker's bran muffin growl in his lower register, swings nicely, and has overall good conception. I fearlessly predict that someday in the not too distant future he'll make a trio or quartet album that will instantaneously convert most naysayers.

I had never seen the show before, but decided I wanted to scope out Tony Bennett on it last week. With Tony, it became a sort of Vegas version of Terence Mcnally's Master Class. As for the much reported-upon Sanjaya and his version of "Cheek to Cheek," he might well turn out to be the lovechild that Jonathan and Darlene Edwards tried to hide. Not since Mrs. Miller!

I hope Sanjaya wins the season and destroys "Idol" in the process. Enuf of this melismania!

Happy Birthday to YOU 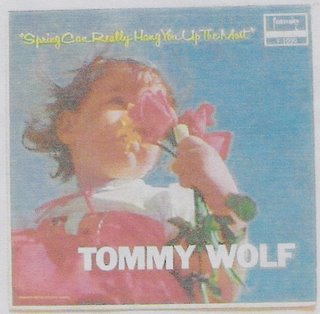 I promise I'll get better at this business of uploading complete albums. But, hey! I'm an old man, and sometimes this stuff doesn't come so easily to someone raised on prrrractically 78s and crystal radio sets. Speaking of which it's my birthday. . .but YOU get the gifts.

Tommy Wolf's first album on Fraternity has been fairly readily available, but this one from 1957 is a toughie. Recently I found a copy in a friend's collection and transferred from vinyl. Feat. the participation of the doubly redoubtable Monty Budwig and Shelly Manne, I like this one a tad better. You've got to click the above link and THEN enter the code "4IKNNY" (wish I could figger out zip files).

Chapter two, part two
Posted by Bill Reed at 9:45 AM No comments: