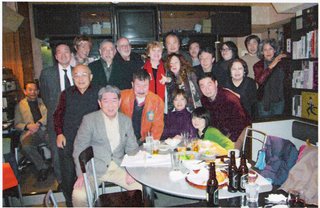 photo: Ryo Mogi
Gathering at Cafe Albert, Tokyo after my 12/10/06 "One Shot Wonders" talk at the Tokyo Vocal Jazz Appreciation Society. That's Pinky Winters middle top, me to her right, Jay san to my right, surronded bt some TVJAS members. The "Albert" serves as a sort of clubhouse for the association

ALTHEA GIBSON, part 6
At one time, Althea Gibson was world-famous. But NOT for singing. A trailblazing athlete who become the first African American to win championships at Grand Slam tournaments such as Wimbledon, the French Open, the Australian Doubles and the United States Open in the late 1950s. She won 56 singles and doubles titles during her amateur career in the 1950s before gaining international and national acclaim for her athletic prowess on the professional level in tennis. Gibson won 11 major titles in the late 1950s. In 1958 she joined the ranks of the Lost ladies of Dot, like Marlene Cord, when she recorded her lone album, Althea Gibson sings. She died in 2003.

PLAY TRACK (September Song)
Posted by Bill Reed at 9:35 AM