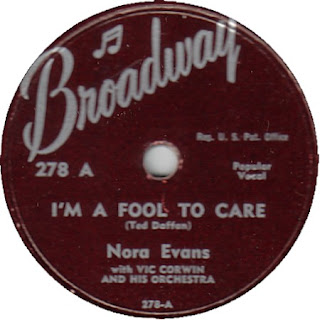 __________________________
In October of 2006, I posted an entry about singer Nora Evans. Actually, "singer" doesn't even begin to cover it. Nora was---I use the past tense, for she a died a few months later in early 2007---also a "shrink" (her words) and in her late seventies (by my estimate) was anxious to get back into show biz after a several decades hiatus. You can read about the first of several late night calls I received from Nora HERE. Not since my late night calls from Martha Mitchell back in the seventies...

In the course of my first talk with Nora, she mentioned that in the early 50s she had helped pay the rent by recording soundalike tracks for a budget label, Broadway. For those of you unamiliar with the idiom, there were a number of such outits during that decade that specialized in grinding out el cheapo cover recordings of hits of the day. Usually these were sold for a fraction of the cost of the originals down at the feed and grain emporium or the local Woolworths. HERE/HEAR is what they sounded like.

And just why---you might ask---am I rehashing all of this old business? I do so because just the other day a reader sent me an mp3 of one of Nora's Budget tracks. I've been able to uncover a total of such nine such sides by her, including covers of Patti Page's "Cross Over the Bridge," Kitty Kallen's "Chapel in the Moonlight" and "Little Things Mean a Lot," etc. But until now I've never heard any of them. Now thanks to aforementioned reader, here is Nora's attempt at evoking one of Les Paul and Mary Ford's hit's. On it, Nora gives her all, even going so far as to try and mimic Ford. On the other hand, the producers of the affair were either too hurried, cheap or both to bother overdubbing Nora's voice, which would edged the side to a certain degree of Paul-Ford verissimilitude on this knock-off of "I'm a Fool to Care."

I was intrigued about Nora Evans as I my own research lead to her. It turns out she also recorded under the name of Ruby Lane. I started out looking for this person since she sang the song in The Gene Krupa Story. The Leith Stevens archives show Ruby Lane was Nora Evans.

Around 1962 she had two songs out on a Colpix 45, that were arranged by Benny Carter. There is a mention of him "discovering" her in Jet Magazine and planning for the session the 45 was issued from. I wonder what other songs were recorded with Colpix and not released.

She had a CD out in 1999. I am saddened to hear she is gone now. I was hoping to find her and learn more about her life and the music she recorded. It would be fun to assemble on CD(s) all of her known recordings. I have a sealed LP coming in for just that purpose.
Any chance of obtaining the MP3s of the early 50's recordings you mentioned?