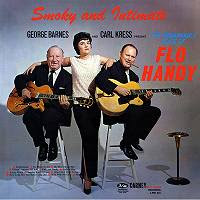 In December 2007 I gave a talk about One Shot Wonders (the criterion is that the singer can only have made ONE album) before the Tokyo Vocal Jazz Appreciation Society. One of the vocalists I presented was Flo Handy. Before I played the two selections by her, I asked the audience (a gathering of wildly knowledgeable Japanese jazz singer devotees) “Does anyone in the know who Flo Handy‘s sister was?” To my surprise, not a single soul uttered the name of Handy’s far more famous sister, none other than that “Cow Cow Boogie” girl herself. . .Ella Mae Morse!

In the liner notes for Smoky and Intimate, Handy recalls that in 1945 she appeared on a CBS radio show, at age 14, and did an imitation of her sister. That might have been one of the last times she ever invoked the name of Ella Mae. Morse’s son Dick told me “Ella Mae and Flo were estranged and never spoke to one another since the 1960's.” In fact, Morse’s last manager, Alan Eichler, never even knew she had a sister. So it is not so surprising that no one at the TVJAS knew about Flo Handy’s sibling relationship.

It was while in Tokyo in late 2007 that SSJ Records asked me to help them secure the rights to release Smoky and Intimate. But when I returned to the U.S. this turned out to be a task that was easier said than done. Eventually, however, I did discover that the recording was owned by the three daughters of the late owner of the obscure but excellent no-longer in-operation Carney Records of Greenwood Lake, NY. This was the second LP by the sometime guitar duo of George Barnes and Carl Kress for the label, now with the addition of a vocalist. And what a vocalist! (continued here)

Thanks for your work, Bill.

But why can't SSJ include liner notes in English IN THE PACKAGE? There are customers that cannot read Japanese. I really appreciate your efforts to post the English here on your website.

I really look forward to this one