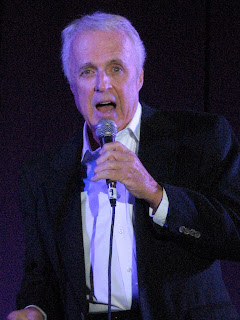 photo: James Harrod
A couple of months back, I went to Vitello's in Studio City, CA to catch singer Michael Dees, a big favorite of mine. I had only seen him "live" one other time, late last year in a terrific big band blowout with Frankie's Capp Juggernaut. Afterward, I posted a somewhat crude video that I captured with my IPod camera. Kinda got the job done, though. For those who missed it first time around, here's a link to my initial youtube post. But I digress. . . as is my wont. Instead, we are gathered around the campfire to discuss Michael Dees, the songwriter. And until my aforementioned Vitello's experience, I had only heard rumors about that aspect of Michael's artistry. I liked what I heard that night, so much so that I wanted to hear more. So I rang him up out of the blue and asked if there was a Dees demo, and indeed-y there was. He sent me one and, his permission secured, I'd like to share a couple of tracks with you. In fact, the first cut was actually recorded that night at Vitello's and just now added to his demo. And who better to sing them than Michael Dees, the King of the Demo Singers himself?

Here is Michael singing his songs "A Kiss" and "Back in New Orleans" , which has recently been recorded by Houston Person.