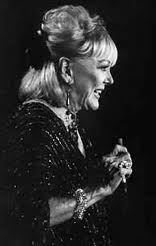 It's doubtful that anyone ever publically referred to singer Marilyn King without appending the phrase "of the King Sisters." Which is all quite well and good. After all, it's the great vocal group THE King Sisters we're talking about here. But in addition to that musically historic connection, the fact is that Marilyn, who died this a.m. after a protracted illness, was a top-notch artist---as the saying goes---in her right. A great solo singer, terrific center stage entertainer, beautiful (make that BEAUTIFUL), sweet, funny, kind and . . .she will be missed. She was the youngest of the sisters and did not professionally join up with her siblings on a permanent basis until 1957 (the group began in the mid-1930s) and is heard on what are perhaps the most well-remembered of all the many, many tracks the King Sisters recorded, i.e. their four Capitol albums, circa 1957-1960. Those latter-day sides are fairly much as hip and enduring as---I'll go out on a limb here---anything by even the Hi-Lo's and Four Freshmen. There! I said it. . .and I'm glad I did.

Bill - Didn't she make some solo records before joining her sisters?

Thank you so much for this appreciation. I was only recently "turned on" to Marilyn through the King Family Christmas DVD. To lose Marilyn and Eydie Gorme in the space of a week was almost too much to bear.