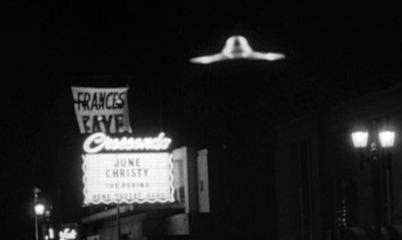 I still recall the date: July 2, 1955. Our junior high school was in California on a ninth grade class trip. Ordinarily, I would never have been able to break free from the group, but my classmates said they would cover for me with our chaperones if I sneaked out; they knew how much of a June Christy fan I was, even though she had only been famous for a year or two. The next hurdle was how I could gain admission to such a smokey-mirrored intime boite as the Crescendo due to being under age? But I donned some hipster shades, dangled an unlit cigarette from my lips  (I didn't even smoke yet), pasted on a false goatee and moustache, and tried to lower my voice to something resembling that of an adult male. ( I was but a few months beyond the stage of being but mere protoplasm in Buster Brown Shoes.) The disguise worked! I got in! I had never even had alcohol before and so I ordered something that sounded nice called a Pink Lady. Yum! (It's still my favorite drink to this day.) I sipped it while waiting for the show to begin. I also was able to fake an adult conversation with a much older guy sitting next to me by the name of Jeff. He was alone, too, and mumbled something about my coming back to his hotel room afterward for a drink. Quite a friendly fellow.

After about ten minutes, the show began. There was a comedian whose name was Jackie Farrell. I'd never heard of him before and he really wasn't very funny. The audience just sort of sat on their hands and applauded politely when he finished, with only a yuk or two from them along the way. Then there was a band . . . Rene Somebody. They played for about twenty minutes. Cha-cha stuff. And then! Over the p.a. system I heard those magic words: "Ladies and gentlemen, the Crescendo is proud to present the Misty Miss June Christy." She came out to a lot of applause, then began her first song, and it turned out to be my very favorite of all of her numbers, "How High the Moon." But she had only sung a few bars when suddenly the nightclub began to shake like there'd been an an A-bomb drop or an earthquake (I'd been warned about quakes before our trip from West Virginia began.) And as quickly as it had started, the music stopped, and June and the band began making a hasty exit from the stage. Everyone else in the room (the waiters, everyone) commenced screaming, in a state of panic, and running for the doors.

"That was quite a jolt, Jeff," I said to my neighbor and then I, too, joined in the panic.

Hitting out-of-doors, I found myself surrounded by people from inside the club, now standing in the street looking up at the night sky. They were up there. Already some military, cops, and official-looking government guys had arrived and the upshot was that no one was allowed to leave until signing a deposition saying they would never reveal what they had just witnessed: Flying Saucers Over Hollywood. (Kind of ironic that June Christy was singing "How High the Moon" when it all happened.)

Please know that I've never, ever written or said a world about any of this until now because . . . I've been muzzled by army brass. But now it can be told.

Hi Bill: Really enjoy the time travel back to your younger days. Brought back memories I have of when I was 16 and getting into Birdland in NYC!