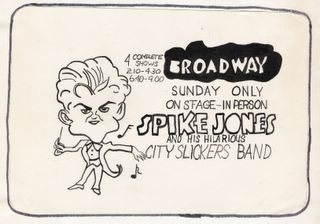 This morning while listening to the Spike Jones collection on Rhino, Spiked ---that's the one with the long essay by Thomas Pynchon and the previously unreleased version of Raymond Scott's "Powerhouse" !!!!!!---I recalled a blog entry that I posted in March. I wrote:

"In 1974, I put out one issue of a 'little mag" entitled Soon. I had started on a second issue of the thing, but the mimeo machine broke down, then we moved to California, and then, and then. . .. The second issue was to have been an all-Spike Jones number. (If anyone's interested in publishing it, I still have the complete manuscript.)"

Recollection of that post precipitated a look, just now, at said manuscript. And a pretty rich confection, it is. Containing an epic essay by David Ehrenstein, "Spike Jones and the Comedy of Deconstruction," which opens with prefatory quotes by French structuralist Julia Kristeva AND Bobby Short ("One of the big tunes when I was a little boy was "Cocktails for Two," which had words like serviette, chansonette and rendezvous. I remember I used to sing it 'some secluded rondayroo.'"). There's also a career profile by moi, a complete discography and Eleven Spike Jones Pomes by Richard Meltzer. Here are a few of them:

1. A SCYTHE CHOP YOUR EYE (SPIKE ACTUALLY SAW THIS HAPPEN)

not much of a great elm hallucination

For those three and eight others in a similar vein I paid Meltzer with an Elvis Sun 78. An equitable exchange?