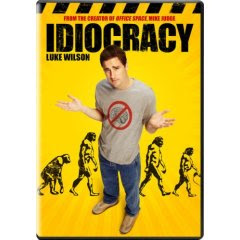 Dear Ted:
I got my copy of Idiocracy for five bucks plus post on ebay. It's also available on amazon.com for three times as much. David E. and I just finished watching it and both of us loved it (me a bit more than him). Firesign Theater, Brazil, Wizard of Oz (i.e. innocence abroad) , and at least a half-dozen other fairly obvious antecedents (Orwell, etc.) all smooshed together. The final result is a film wayyyy too hip for the house. The paradox of a smart film full of dumb (i.e. fart, etc.) jokes. Must've caused the brains of the teenybopper test audiences to explode.
After you brought it to my attention, I asked a number of the most informed cinephiles of my acquaintance, including a member of the board of directors of the Saturn (Sci-Fi) Awards, a Mike Judge fan, AND David, whose job it is to stay up-to-date on such matters. And none had heard of it. Really a first in my set, in which I am ususally the last to know, but in this instance the first. The special effects of a futuristic Costco was a most amazing thing. Finally. . . a reason for CGI.
BTW: A far cry from the movie we watched last night, a very serious and sad Japanese film about Alzheimer's, Memories of Tomorrow, starring the wonderful Ken Watanabe. In the world of Idiocracy, Alzheimers is most likely rampant but, paradoxically, no longer a problem.
Thanks for the heads up on Idiocracy.
Best,
Bill
Posted by Bill Reed at 1:38 PM