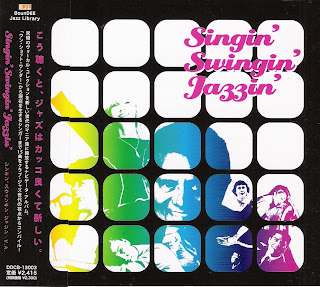 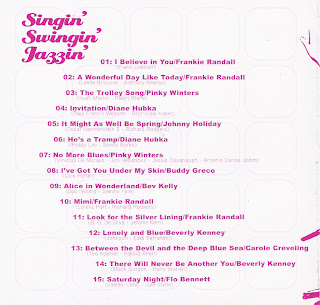 ___________
To hold this new---now available---CD in my hands is to watch the last two years of my life flash before my eyes. Every one of these tracks is from an album that I either directly or indirectly reissue-produced, or produced. It's been a couple of great years working with SSJ Records in Japan, who licensed this material to the BounDee Jazz Library label.
With the obvious exception of the late Beverly Kenney, I spent many long, pleasant hours on the phone or in person dealing with these artists, and in every case I now consider each of them a friend. In the instance of Kenney, in the process of writing liner notes, I came to know several of her close friends.
With Frankie Randall, it's come to the point where we just phone one another up to shoot the breeze. A great story teller in addition to still performing at the peak of his powers. Diane Hubka and I have also bonded quite nicely, thank you very much. Same with Flo Bennett, Johnny Holiday and Bev Kelly. And who'd-a thunk I'd ever hear the phrase, "Call for you from Buddy Greco on line one"? He's kind of a legend, you know!
As for Pinky Winters, we go way back. . . all the wayyyy to 2000, long before I ever got involved in my present record biz activity. Someone told me, "Phone Pinky up, she'll be your friend for life." And it looks like he was right. My first project ever was Pinky's and Richard Rodney Bennett's 2001 Rain Sometimes.
The (unintentionally) mysterious and elusive Carole Creveling even sent me a Christmas card last year.
Singin' Swingin' Jazzin' or as I prefer to call it Dr. Chilledair Presents.
Posted by Bill Reed at 2:16 PM