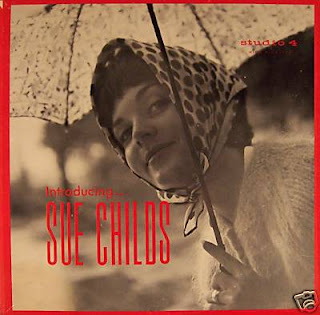 _______________
"For playing on the [1964] 'Introducing Sue Childs' album, I received sixty dollars, a pair of pants [?] and a box of Sue’s album,” jazz guitarist Bill Pasquale told me recently. “At the time. I said to one of the producers, Jim Sotos, ‘What do you expect me to do with all of these records?’ Sotos said, ‘Give ‘em to your friends, I guess.’ Which is exactly what the musician proceeded to do, hanging on to only a couple of them in the process. Too bad he didn’t hold on to more, for today the original vinyl of the recording sells in the $300-$400 range. Not bad for a release that certainly didn’t sell out its original pressing of 1,000 copies.
The reason for the extreme bump in the original price has to do not only with the fact that the LP is by a good but obscure singer (whose only recording this was), but also by virtue of an appearance on the release by tenor sax player J.R. Monterose. And just how, exactly, did the legendary (and highly collectable) musician end up on not only this recording but another one as well on the small, fledgling Rock Island, Illinois Studio 4 label, operated by musicians Jim and Tony Sotos? It’s something I’ve long wondered about, and finally, in my conversation with guitarist Pasquale from his home in Brookfield, Illinois I was told the following story: “J.R. Monterose was traveling as a sax player in the band of, of all people, the rock group Jay and the Americans. Somehow Monterose stayed behind when the band left Rock Island and he stuck around.“ Pasquale laughed, then added, “I guess you should have called the group ‘J.R. and the Americans.
The musican was thus taken up by the local Rock Island, Illinois jazz community and for a while became a very big fish in that locale’s somewhat small jazz pond.
By the way, I highly recommend a CD, Girl Talk, that the above-noted guitarist recorded recently with his wife, singer Sue Pasquale.
Posted by Bill Reed at 1:46 PM

Is it likely to be reissued in cd via your SSJ label?