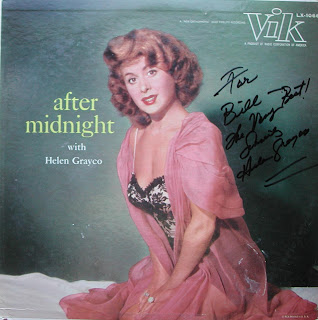 ______________
Last weekend I conducted an interview with singer Helen Grayco for an article about her that a jazz critic friend of mine and I are writing for a Japanese publication. Based solely on her slim ouevre of just two solo albums, she is considered a great singer in that country, verging on Goddess.

There were numerous fascinating disclosures that Grayco made about her career in my conversation with her via phone here in L.A. An unbilled appearance as a tot in a Marx Brothers movie for example. Another revelation regarded a music scene that "just grewed" in the mid-1970s when she and her second husband, restaranteur Bill Rosen (the first was. . .Spike Jones!), hired pianist Bob Millard---who as luck would have it, is an acquaintance of mine---to play atmospheric background piano for diners at their Beverly Hills restaurant, Gatsby's. Bob, it seems, was also such a fine accompanist that, soon, singers began to come by not just to dine but also to sit in with him. . .like Tony Bennett, Vic Damone et al. (Sinatra would also drop in on occasion, but always only to listen.) And so, for several years, Gatbsy's became a place for singers to "woodshed" here in Southern California. Sort of a jazz vocalists' Minton's.

Grayco also began to sing there. Thus, although she had officially retired from show biz in the late 1960s to concentrate on her new marriage, a few years later, as chance would have it, she was back singing just as much as she ever had. . .nearly nightly at Gatsby's.
I never knew about this somewhat legendary venue until Grayco told me about it. Obviously, then, I also wasn't aware of Bob Millard's participation in the proceedings there, and I phoned him right after I spoke with my interview subject, and he confirmed most of what she had told me. When Keizo and I write the article, perhaps I can also interview Bob about this fascinating singers' hangout. When the Grayco article is published, I'll try and post some of it here in English.
Posted by Bill Reed at 7:41 AM