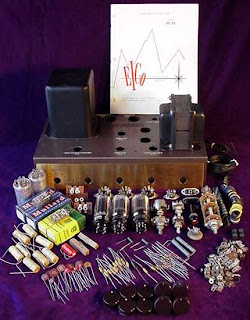 Yesterday, I was a guest of my friends Hajime and Han at a meeting of the Los Angeles and Orange County Audio Society. While there, I began to relate the following audiophile fable to Hajime, but we were somehow interrupted, and so when I arrived back home, I sent him the following followup email. I reprint it here because IMHO it is not without its somewhat amusing overtones (after all, this IS alleged to be a blog of mirth and music).
Hajime san:

To make a long story short (which I seldom do), after I finished all the weeks and weeks of soldering my Eico stereo amplifier kit in high school in 1960---building amps from kits was all the rage that season--- I had all these parts left over. (I have trouble even reading an instruction manual for a ballpoint pen.) And so. . .

I plugged the amp into a long extension cord which I ran the length of the house. Thus, the amp was at one end of the house and I was at the far end. I crouched behind a couch and plugged it in. At the other end of the house, there was immediately a rumble, a flash of light, and a sort of explosion replete with acrid-smelling smoke. I waited a few minutes, then tentatively plugged in the turntable to the (80 watts) amp, hooked up the speakers and, by crackies, the damned thing worked absolutely perfectly. I threw all those extraneous diodes, transistors etc. away (fie!), and kept the amp for at least ten years, during all of which time it performed absolutely perfectly. (I'm not exactly certain that I know what the moral of this story is supposed to be [?].)

I finally abondoned it for one of those classic suitcase KLH Model 11's, perfect for my then-hippie lifestyle and which I used for at least a couple of decades.

Not that you asked, but. . .. Today, I have a Nikko amp and pre-amp (with mega-wattage), KLH model 24 speakers that I bought at a garage sale aeons ago for ten dollars apiece, and which I could very easily blow out with the Nikkos if I'm not careful, and a nice Technics turntable.

Well I guess I didn't EXACTLY make my long story short, but when I start writing OR talking it often takes me a while to get to the verb......

Here is a link to Eico amplifier kit info. http://en.wikipedia.org/wiki/Eico

Thanks to you and Han again for a lovely afternnoon.