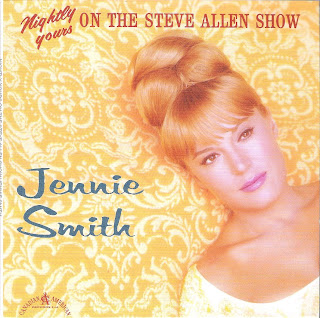 ________________
SSJ Records (Japan) has just released, on CD, singer Jennie Smith's Canadian-American Records album from 1963. I had a lot of fun working on the reissue with Jennie, and, in fact, she even wrote the liner notes, included in the CD package in Japanese translation. I was very proud and happy that she took time out of her busy schedule to do this for SSJ. Here is her original English language text.

"I was born in a coal mining hollow in Burnwell, West Virginia in 1938. At an early age when my mother took me to movie musicals, I'd go right home and sing all the songs. Singing was what I wanted to do more than anything. My stepfather, John Kristof, was a newscaster at radio station WMON in Montgomery, WV. Eventually we moved from Montgomery to Charleston where my stepdad signed on with WCHS - doing news, weather, etc.

After graduating high school at age 17, I went to N.Y.C. Hugh McPherson (WCHS late night) put me in touch with the right person, Ray Ellis. I auditioned for RCA Records and got a contract. Steve Allen, who had an NBC Sunday night television show, heard one of the tracks on my album and invited me to do a guest shot on his show. This was my first national television performance.

I started working nightclubs around the country (with a chaperone, as I was under 21). My first nightclub date was at the Black Orchid in Chicago with Jonathan Winters, one of the funniest comedians ever. Later, I again worked the Black Orchid with a comedian who was doing his first nightclub performance - Bill Cosby. He talked a lot about a beautiful girl named Camille, that he wanted to marry. A few years later, Biil and I worked together again - this time at Harrah's in Lake Tahoe. By now, he had married Camille and they were expecting their first child. Bill had zoomed to stardom and I felt so lucky to be performing with him. I'm uncertain as to when it was, but for a few months I was a regular on Arthur Godfrey's radio show on CBS.

Steve Allen moved his telelvision show from N.Y. to Los Angeles, and was syndicated five nights a week. His show kept asking me out to L.A. to perform and finally he hired me to work on his show as a regular. I moved from New York to L.A. and this was one of the happiest periods of my life. It was exciting meeting all the stars that guested on the show, and the musicians on the show were absolutely top notch, a pleasure to work with. Sometimes the entire entire show worked other places around the country doing concert dates.

After being on Steve's show for about two years, I started doing more nightclub dates. I worked with Red Skelton at the Sands in Vegas, Joey Bishop at Harrahs in Tahoe, the Smothers Brothers at the Flamingo in Vegas, Mickey Rooney at the Fairmont in Vegas, then toured with Buddy Hackett. Pat Boone, his musicians and I toured in Japan. Also, around 1968, I was lucky enough to land the national Chevy TV and radio commericals on which Frankie Randall and I sang together. It was exciting and fun.

Eventually, however, traveling began to lose its excitement for me. I longed to be in one place with my friends and my little pet dog. I didn't work for nearly a year and finally decided to live a more stable life by getting a secretarial job.

I worked for General Reinsurance Corporation for 31 years (I retired about ten years ago). During the time I was at General Re I met my husband, Arthur Brown, and we've been together since 1978.

Steve Allen and I collaborated on two songs - I wrote the music and he did the lyrics. To this day I have jazz artists calling to ask for a lead sheet on one of the songs, "After You." I recorded both the tunes on an album for Dot Records.

A while back, I collaborated with a gifted lyricist, Ruth Feeley and the fabulous writer, Jack Segal, who's written some of the world's treasured songs like "When Sunny Gets Blue" and "Scarlet Ribbons." Nearly every top artist has recorded his material. The song we collaborated on is called "The Best of Love", on which I wrote the melody, and Frankie Laine recorded it."

Here's a link to my Jennie Smith discography.
And a link to a Life Magazine article about Jennie.
AND a link to a 1968 "Frankie and Jennie" Chevy radio commercial.
Posted by Bill Reed at 7:59 AM

Excellent! Thank you for providing the English liner notes (I wish SSJ would include them). It looks like 10 singles (20 songs) were never on LP. That would make a nice CD, if only a private circulation CDR. Are there any plans to reissue the Columbia LP, possible with the Columbia singles added?

Have been in love with your voice since I heard your 'Love Among the Young' album back in the '60's. After reading this bio, I wish you had remained singing. Thank you for the great songs you did record.
Vanda King
http://www.youtube.com/user/DBsTreasure?feature=mhee

Long have been in awe of Jennie. Remembering and giving credit to her and Steve each time I sing Good Morning My Dear I Love You Today. Bob Fraser (clevelandguitarist/arranger) made a beautiful arrangement for me .

Long have been in awe of Jennie. Remembering and giving credit to her and Steve each time I sing Good Morning My Dear I Love You Today. Bob Fraser (clevelandguitarist/arranger) made a beautiful arrangement for me .