reposted from 2006 (with slight alterations) 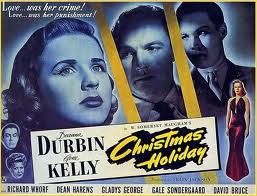 About twenty years ago the L.A. Times published an amazing article about Deanna Durbin. One of their writers---could it have been Kevin Thomas?---found himself in the French Village where Durbin resides. They didn't know one another, but he decided to affect an unannounced pop-in. He rang the bell, or pulled the chain, or rapped with the knocker. . .or whatever, and a moment later the door was answered by someone immediately recogniseable. Doubtlessly Durbin! She was perfectly okay with the unannounced intrusion, and the writer spent the rest of the afternoon with her as she lived her daily life, went shopping in the market, etc. Worth checking out the article on-line or wherever.

I was at songwriter Lew Spence's 2006 birthday party here in L.A. about a half-year back---the one where Pinky Winters sang AND accompanied herself on piano---and had a delightful conversation with writer-actor-director George Furth. He told me that he happened to be pretty good friends with Durbin. There were about a half-dozen others in the conversational circle (all much younger than Furth and myself), and nary a one of them had ever heard of Durbin. Not even a single, "I think I once heard my mother. . .." Somewhat ironically, even as I write this, Durbin is a very well-known and revered artist in the former Soviet Union where pretty much, I am told by reliable persons, nearly everyone knows who she is.

For the record, my favorite Durbin movie is "Christmas Holiday," where she plays piano in a whorehouse and falls in love with Gene Kelly who turns out to be a psychopatic killer and is mowed down in a hail of gunfire, after which she goes into a church and sings Ave Maria. The End! Directed by the great Robert Siodmak, who helmed this one between making "Phantom Lady" and "Cobra Woman". . .the same year, 1944!

CHRISTMAS HOLIDAY WITH DEANNA DURBIN AND GENE KELLY! Clearly wartime movie patrons thought they getting a festive holiday musical romp. Instead, can you just imagine their utter shock, dismay and even occasional vomitation as they stumbled out of theaters after viewing this deceptive film noir? The film in which Durbin intro'd Frank Loesser's "Spring Will Be a Little Late This Year."

It's a safe bet that this sub rosa film noir was responsible for at least a few suicides amongst unforewarned filmgoers. ("Momma went to the Bijou and never came back.")

One of several failed attempts image reconstruction for the star. Finally, in 1949, she packed it in and moved to France, lived happpily everafterward, and was never heard from professionally again. Like Garbo, Jo Stafford and only a handful of others, she knew to quit while she was ahead (well. . .almost).
Posted by Bill Reed at 8:36 PM