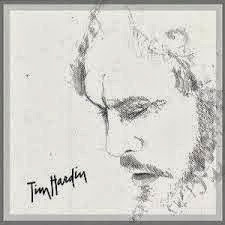 "During the period of the Woodstock mansions and international tours, Tim more-or-less disappeared from the lives of those who had known him on [the Lower East Side's] 9th Street. Some accused him of high-hatting them. But when he ended up on Pompa's doorstep in 1979 like a beached whale, his old friend took him in. One afternoon Pompa and Tim went to a mid-afternoon Hollywood Boulevard showing of the Paul Simon movie One-Trick Pony, containing a scene in which two characters are shown arguing over whether Tim Hardin was still alive or not. It gave Tim the best laugh he'd had in years. Eerily, he did die not long afterward, officially of  'natural causes,' but there's little doubt he was offed by heroin addicts in the Hollywood neighborhood where he lived, over a rather large stash known to be in his possession. The cops disn't even bother to investigate; here was just one more dead junkie they didn't have to deal with any more."
Posted by Bill Reed at 10:56 AM

I met Tim several times. I really wish he had kept it together.

The album cover that you pictured was special. I think there were only several hundred copies, but it has been repressed recently, I think.

My favorite show was solo Tim, piano on some, guitar on others.