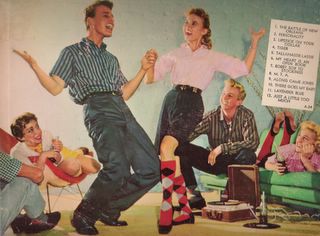 Are we havin' fun yet?

"Arthur Malvin, 83; Lyricist, Composer Won Two Emmys
Arthur Malvin, a composer and lyricist whose work with Carol Burnett and Frank Sinatra earned him two Emmy Awards, and who received a Tony nomination for helping create the musical "Sugar Babies," has died. He was 83. . .."

So began an obituary in today's L.A. Times. In addition to the many hats that Malvin wore, as evidenced by his obit, I seemed to recall his name from yet another part of the musical waterfront. At first I couldn't remember, but I cogitated reallll hard for a few minutes and then---boingggg!--- it all came rushing back to me! Arthur Malvin was also ARTIE Malvin whose voice was heard on all those 18 hits for 2.98 LP packages that were so popular in the 1950s, a fascinating, woebegone, sub-sub genre of the era. The kind offering up "Top Hits of the Day Played and Sung by Popular Radio and Television Artists." Leading one to wonder, as I wrote elsewhere on this blog, if they are so popular WHY, then, do they mostly remain unidentified? Malvin's name, though, was usually listed. A big fish in that small but significant vinyl pond.

I was actually naive enough to have bought a lot of those packages as an adolescent---besides, we were wayyy poor---and have managed to hang on to them through all my various locational perigrinations. I just now checked my collection and, sure enough, I have Malvin singing a vast array of 50s pop, everything from "Jailhouse Rock" and "You Send Me" to the Bill Haley hit, "The Saints Rock and Roll." He even did an entire album of Haley knockoffs. Malvin was, to put it kindly, not so adept at this kind of heavy kid music from the 50s, but listening, just now, as he wraps his tonsils around "A Blossom Fell" (on "8 Top Hits" - Waldorf Music Hall 3313), he proves more than adequate at boy-band-singer crooning.

Never putting two and two together until now, I was always curious about whatever happened to the guy. Now I know. And I can't help but wonder if Emmy-winner Arthur Malvin woulda copped to being just plain ole Artie: "Hey, Arthur! Howzabout knockin' off a few bars of 'Itsy Bitsy Teenie Weenie Yellow Polka Dot Bikini'?" Arthur, indeed!

There is a very good Malvin bio, with emphasis on his singing career here: http://spaceagepop.com/malvin.htm
Posted by Bill Reed at 9:23 AM

You have a scary memory.

You have no idea how much that means to me.

Indeed, my dad was much more "Artie" than Arthur, and he was first and foremost a singer. Too bad the L.A. Times didn't get the emphasis right. I thank you and others who make the effort to keep my dad's memory alive. Spaceagepop has a number of errors in their bio of him but I'll try to get that corrected.

I'm a librarian in Ashland, Or. and we have a patron who is determined to get the words and music to a song "Wouldn't You Like to Taste My Pears". It was sung by Artie Malvin, and played on a local public radio station. The show's producer doesn't have any information, evidently he just has the clip he played.
Any leads?
Thank you.
Amy Kinard
Ashland Branch
Jackson Co. Library Services

This was written by McHugh and Malvin for the 1979 show Sugar Babies, but was cut before the show opened.