Working on the weekend 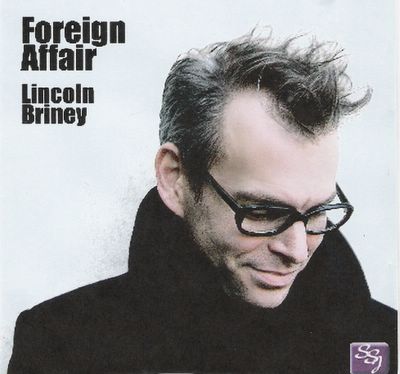 I am the associate producer of this CD. I just now--i.e., "working on the weekend"--finished writing the following copy for Lincoln's website that will be up and running very soon (address forthcoming).
___________________________________
Despite a professional recording career stretching back over two decades, Foreign Affair is the first full-length solo album (not counting the unreleased demo disc entitled "5"), to be released by singer Lincoln Briney. His debut CD!

It took the confidence and vision of respected Japanese music figure Yasuo Sangu to bring Lincoln to the forefront.

In the Fall of 2006, Sangu began his new jazz label SSJ Records. With its appealing catalogue mix of both new and old recordings by the likes of Rosemary Clooney, Frankie Randall, Jack Jones, Jackie Paris, Pinky Winters and David Allyn, the success of SSJ has been immediate. Thus enabling the label to begin thinking about signing talent not so widely known and recognizable. And when Sangu heard Lincoln's demo CD in Winter 2005-06, his response was positve and immediate. He signed Lincoln to SSJ.

It was in Seattle that Northern California native Briney began solo recording (as opposed to hundreds of group session commericals and jingles) a few years ago. Most of the tracks on Foreign Affair were cut there.

Here's how Lincoln describes his sound: "I suppose I am a student of speech level singing. The directness and honesty of in-your-ear singing. I really like that. When I first started singing jazz I identified strongly with the west coast sound, that breezy, laid back, minimalist sound. Marty Paich, Gerry Mulligan, Chet Baker. All those late fifties L.A. players."

Foreign Affair is an appealing mix of the new (2 x Sade), the familiar (Besame Mucho, Violets For Your Furs, etc), alongside the enticement of several Brazilian classics by the likes of Jobim and Bonfa. On the new CD's 13 tracks, in addition to the widely-known guitarist Bill Frisell, Lincoln is backed by an array of some of the country's finest young players.

It should come as no surprise that Briney looks to Brazil for much of his musical inspiration. That country's language has a word, "saudade." Sort of untranslatable, but meaning an inexplicable amalgam of melancholy, tempered with recollections of happiness. Listen to Lincoln and you will begin to comprehend.

The release of Foreign Affair is scheduled for Japan, Fall 2006 on SSJ Records, to be followed Summer 2007 by release in the U.S. and elsewhere.
Posted by Bill Reed at 10:11 AM

I've been a fan of Lincoln's singing for about 15 years now and was there at the release of his demo CD. Every couple has "their song". Lincoln's "Embraceable You" is "our song". It just doesn't get any creamier and dreamier than Linc's voice. He's a superstar in my book.