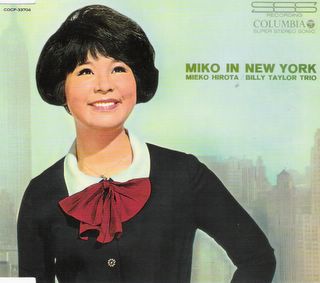 Are you familiar with the very big Japanese pop star since the mid-1960s, Mieko Hirota? Perhaps not. But nearly all of her native countrymen know her. I met her for the first time recently here in L.A. Hirota san was passing through town with her manager on their way back from a top-secret recording project in a part of the world other than Japan. A mutual friend suggested that we get together. I subsequently received as a gift from him a boxed 8 CD set of Hirota's more-jazz oriented albums over the past 40-years-or-so that has just come out. They are all quite good. I am led to believe that this is the largest Japan-only boxed jazz set ever released. Or some such Jesuitical hair-splitting calculation of one sort or another.

Part of the lore about (her fans call her) "Mico" (or "Miko") in Japan is that when Ella Fitzgerald first heard Hirota sing in the 1960s, when Mieko would have been in her mid-to-late teens, she wanted to---the phrase keeps cropping up---"adopt Hirota." I am assuming that what this means in reality is that Ella offered to mentor her or take her under her wing. Mieko san's English is not all that terrific (these days, most Americans' isn't either), thus I opted not to get bogged down quizzing her about this otherwise intriguing Ella anecdote.

But Hirota did have an absolutely fascinating story to tell about how she began singing jazz in the first place. All because of a chance meeting with jazz promoter extraordinaire George Wein on the Japanese Shinkansen bullet train in 1964. Up till then, known as the Dynamite Girl, Hirota had been almost strictly singing stuff like Brenda Lee and Annette covers in her native language. But right there on the spot, Wein had her convinced that she that could sing jazz (which she probably had almost never heard before). I think what Hirota told me is that, shortly thereafter, pianist Wein accompanied her singing at an audition in Tokyo and the next thing Mico knew, she was appearing---she told me in a voice filled with awe---"on the same stage as Frank Sinatra" at the '65 Newport Jazz Fest. She performed an 8-song set backed by Billy Taylor's group. The LP she cut immediately subsequent to that and consisting mostly of Bob Dorough songs, "Miko in New York," is, taking her limited exposure to jazz into account, pretty amazing. Later albums display an increased understanding for, and facility with the form. "New York" was produced by multi-hyphenate music man Bobby Scott. Billy Taylor's trio also accompanies her on the lp, and the presence in the group of bassist Ben Tucker, Dorough's songwriting partner, is surely the reason for the felicitous inclusion of so many of the duo's compositions.

Although few non-Japanese in the U.S. are likely to have heard of her, Mieko Hirota is, extra-nationally, probably the most famous person that I ever sat down and just spent a nice sociable afternoon with. . .not counting all those countless movie junkets that I used to do for the San-Francisco Examiner (If it's 2:15, this must be Mel Gibson).

As noted, Hirota san's English is a bit on the limited side and my Japanese is next to non-existent, still we managed to communicate quite nicely. A star since the mid-1960s, she still commands quite a following. But she was so completely unaffected and unassuming, you'd never guess that she is someone who, if she wished to do so, could trot out all the diva-tude she wanted to and get away with it. For as a Japanese friend of mine recently observed, "Mico. . .she is pops queen!"
Posted by Bill Reed at 7:30 AM

MIEKO HIROTA IS THE BEST SINGER OF THE WORLD!! SONGS LIKE "NINGYO NO IYE", "WATASHI GA SHINDARA" "RODAN" "ONNA NO KUSE" and other hits are unforgettable masterpieces!! MICO I LOVE YOU-forever and ever---------