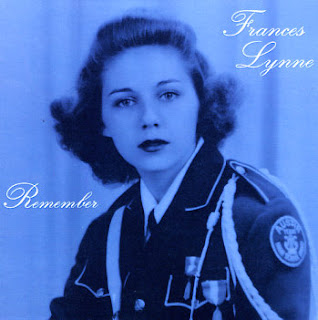 __________
Two RIPs in one week. I guess it comes with the territory of one's aging, and let's face I ain't zackly no spring chicken. Page Cavanaugh and also, last Sunday, singer Frances Lynne.
I met singer Frances Lynne and her husband, master jazz trumpeter John Coppola, in a most interesting and roundabout fashion. A few years ago I was researching the release of the Bill Black CD, Down in the Depths, for which I was the release producer for SSJ Records. When I learned that a singer by the name of Frances Lynne had been in the '49 Krupa band with Black, I thought I might try to "Google" her. But I had little hope of striking paydirt; her name was such a fairly commonplace one that I feared I would get thousands of "hits." But, fortunately, hers was the very first "Frances Lynne" that popped up because of a recent radio interview she and John had given. I then looked up the Coppolas in the Yahoo phone directory, found them living in San Francisco, rang the them up and lo and behold who should answer the phone but Frances. Instead of the year it later took me track down singer Carole Creveling, finding Frances was quick as a flash.
It was love with the Coppolas "at first sound." She was very helpful with my Bill Black research. Then John got on the line and in the course of my conversation with him (he was in the Woody Herman band at the same time as my friend Lou Levy), he happened to mention that, a few years earlier, he had produced an album, Remembering, for now long-retired Frances. A couple of days later, John sent me a copy and I was astonished at the overall professionalism of this mom n' pop effort. First off, it was just about the best selection of repertoire I had ever seen on a single album, i.e "Last Night When We Were Young," "Blue Prelude," "Can I Forget You?," "Spring Isn't Everything" and. . .well. you get the idea. And the sidemen on the album were just as jaw-droppingly impressive: Johnny Coles, John Handy, Herb Steward and. . .well, again, you catch my drift. And Frances sounded wonderful, even after all these years of professional inactivity!
Then, the following December I played a couple of the tracks at a presentation I made before the Tokyo Vocal Jazz Appreciation Society. Immediately after the conclusion of my talk, Mister Yasuo Sangu of Japan's SSJ Records approached me and said that he would like to reissue the record in that country. I should add that, up to that point, there was not a single Google hit for the undeservedly sub rosa album, so SSJ's eventual reissue of the CD finally and unquestionably helped bring deserved attention to this little gem of vocal jazz mastery.
And I'm happy to note that long after the reissue of Frances' CD was effected, John, Frances and I became ongoing inveterate phone pals.
My unbounding and sincere sympathies go out to John Coppola and his family.
Posted by Bill Reed at 10:05 PM

The Frances Lynne CD on SSJ records is excellent. Thanks Bill for helping people hear her singing, and to remember her.