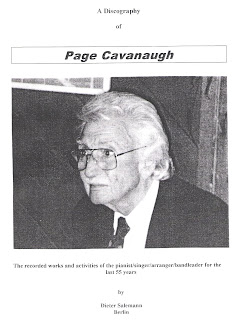 ____________
I just received this in the mail today, from my friend Larry Canova. How did I ever live without it? Almost couldn't resist taking it into the tub with me this a.m., but better sense prevailed.
The first thing that caught my eye about this 91-page (!)circa 2001 labor of love was just how many great and near-great singers Page Cavanaugh backed during his career (in addition to all the recordings where he also accompanied his own terrific singing) either on recordings or "live" / film / radio / tv. But a partial list (*'d where "live," etc. only) of those fortunate many includes the likes of:
Beryl Davis, Doris Day, DeCastro Sisters, Johnny Desmond, Michael Feinstein, Betty Garrett, Connie Haines, Jane Harvey, Dick Haymes *, Peggy Lee, Helen O'Connell, Sue Raney, Mavis Rivers, Bobby Sherwood *, Mel Torme, Frank Sinatra, Kay Starr.
Probably the only recordings missing from the discography are a few post-publication releases, including four more vocal-backing albums, by singers Mark Miller, Lauren Koval, Tony London, produced by (yes, THAT) Marsha Hunt, & (yes, THAT) Stefanie Powers. There was also the last great studio effort under his own name, "Return to Elegance."
At the time, last year, when Page's career was finally interupted by health issues, he was working on an (only partially completed and as-yet-unreleased) album with Nancy Sinatra.
Posted by Bill Reed at 11:16 AM