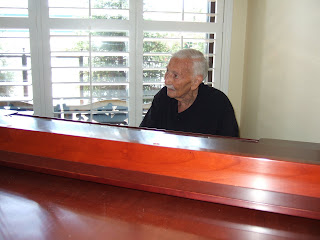 __________
Sorry to report that the great pianist-whisper vocalist (he loved being called that) Page Cavanaugh died this morning at a San Fernando Valley hospice after a brief bout with cancer, complicated by kidney failure. He would have been 87 in January.
Until quite recently Page gave a series of Sunday afternoon concerts at the Seasons assisted living facility in Northridge, CA. He went out musically at the top of his game.
Page was among a handful of pioneers who strongly overhauled the sound of American jazz in the 1940s, turning it into a much softer, less aggressive sound and surely paving the way for the West Coast school of jazz that would come a few years later. Among that rank, also, were Joe Mooney, Matt Dennis, Nat King Cole and Bobby Troup. Joao Gilberto is on record as citing Page as having a major influence on his art. So one could regard Page, also, as a Bossa Nova progenitor.
I came to know Page fairly well over the past few years. Surely also one of the wittiest persons I ever encountered. One of my favorite Page moments happened at a performance of his at the S.F. Valley club, Charlie-O's. He had just finished a rather un-Page-like overly flashy run on the keys, more in keeping with the style of, say, oh Liberace. He shut down playing for an instant, turned to the audience and offered the observation that. . ."A little whorehouse piano never hurt anyone." Then commenced playing again.
I had the honor of cobbling together a little video tribute that was shown at his 85th birthday party a couple of years ago. Here's a link.
Recently there was movement afoot to get Page a star on the Hollywood Walk of Fame. Now it can be told, that when the sponsors approached Page's old friend Doris Day for a recommendation to the H'wood Chamber of Commerce, she acted with whiplash-inducing alacrity. I can't remember the exact wording of what she wrote back, but it was something to the efect that no one was more deserving of such an honor. As usual, she was only right.
Posted by Bill Reed at 11:43 AM

Bill - Very sorry to hear the news. A sad loss to American music!

Shall spend this Saturday listening to all his records. RIP, Page, Hooray for Dee Day.

Bill, we too are very sorry to learn of his passing. He was such a funny, gifted guy.

Here are Page and Doris in Romance On the High Seas.

We've lost an extraordinarily gifted artist. The lovely part is that he spent his last years in the presence of admirers.