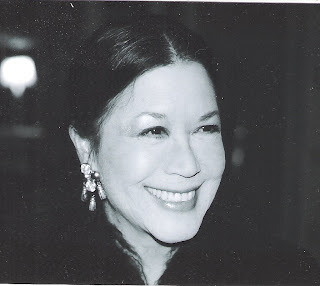 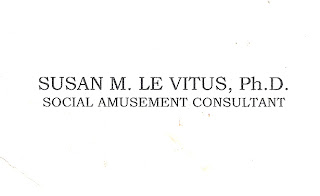 _____________
The "business card" above was given to me by Susan when I first met her seven years ago. I had gone to see singer Pinky Winters perform here in L.A., and it turned out that Susan, who was also in attendance, was a long-time friend of Pinky's. I am saddened that Susan and I never got to also be exactly long-time chums. But the relatively few years of friendship we shared were definitely cherce. A majority of the "meetings" we had were telephonic, and I'm afraid it will be a long, long time before I stop thinking "Oh, that might be Susan!" whenever the phone rings.

Her excellent taste in music was manifest in her overwhelming love of Page Cavanaugh; so much so that she even co-produced his last CD, Return to Elegance. Susan also produced one other CD, by the fine singer-pianist Bob Millard, perhaps best remembered for the years he spent performing, and accompanying singers at Bill Rosen and Helen Grayco's memorable Beverly Hills boite, Gatsby's.

Very few of Susan's friends knew exactly how sick she was, for she erected elaborate subtrefuges to hide the sad truth that she was probably terminally ill. I certainly never knew. The last time I saw her was late last year when she moved heaven and earth to make sure that Page C. was included in "Great Day in L.A.," the group shot of jazz musicians taken at UCLA.

I could never get enough of just the "sound" of Susan's voice. . .if you can imagine a kind of a cross between Jean Arthur and Myrna Loy! Then you add to that the sheer wonderfulness of all of Susan's stories, observations, and that wonderful laugh of hers, and is it any wonder that I don't think I ever had a telephone conversation with her that clocked in at less than two hours?

Susan was a passionate lover of animals, which is another thing that bonded us. She would always sign off our phone marathons by saying, "Give Kuro a kiss for me." (Kuro being the beloved cat who rules the roost here at Oblivion Towers.) And I always did.

Susan was the last of the red hot practitioners of the "bread and butter letter." I still have dozens of them around here, stuffed in books and desk drawers, with every last one of them stickered with one or more cat "stamps."

Probably my favorite story of Susan's was one so rich and unforgettable, and yet---I've asked around---I'm perhaps the only one she ever shared it with. ("Did Susan ever tell you about the time that. . .?) I related it on this blog a while back. At the time, I didn't identify the dramatis personae by their real names. But now I guess it bears re-telling with Susan and Jim Le Vitus (he died in 2001 just a few days after his old high school friend passed on) attached to the story. To wit:
_______________
"When Susan began dating Jim some years ago, she had just met him and already was quite smitten. Then one night they went to dinner at the house of some friends of hers. Spying a grand piano in the living room, Jim asked:"Do you mind if I play?"" Thought Susan, "He plays piano, too?! " He then proceded to sit down and knock off a quite competent rendition of "The Man I Love.""More, more!," everyone said."No, I think that's it for now. Maybe later."But he performed no more that evening. Later that night he told Susan that was the ONLY song he could play, and had been coached how to do so by rote by (eventually highly-regarded) jazz pianist Lou Levy when they were both teenagers."It impresses girls no end," Lou told him. Otherwise, Jim could not even navigate "Chopsticks." Nevertheless, he and Susan had many happy years together."
_______________
An extraordinarily beautiful woman when I met her in 2002, it goes without saying that she was also quite something to behold in her twenties as well (the above photo was taken last year at the 85th birthday bash she threw for Page Cavanaugh). Only after her recent death did I learn that she was not only Miss Hawaii of 1963, but as such was also a runner up in the Miss World Pageant that same year. Is it possible that she never vouchsafed that autobiographical bit to me because she felt I might find it insufficiently interesting, or maybe she was just saving it for a phone visitation somewhere down the line? Alas. . ..
Posted by Bill Reed at 11:14 AM

A very nice tribute, Bill. It makes me wish I had known her.