My uncompleted liner notes for a failed CD reissue 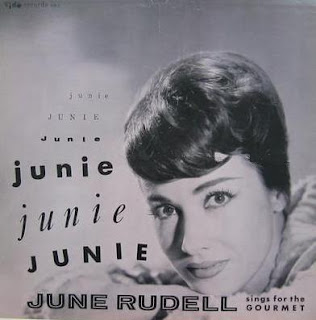 ______
I found these earlier today while rummaging around in a drawerful of old snow.
Even though you’ve probably---make that “definitely“--- never heard of June Rudell before, her singing voice is that of a thorough-going professional. She WAS a solid pro: a singer who plied her jazz-tinged vocals nearly every night of the week for a number of years but NOT always necessarily where one might expect to hear such sounds, i. e., not some smoky jazz joint, or similar locale. The following review of cowboy star Roy Rogers‘ traveling revue---from a local newspaper, the Evansville, Indiana Courier, from the great wilds of America in the mid-1950s---explains where, how and why.

“The Rudells begin their act when Roy [Rogers] introduces curvy little June to sing ‘My Baby Just Cares for Me.” She has a svelte show-type voice to match her figure and the song choice is a nice change of pace in the western flavor.

As she starts to sing ‘Tammy” she is interrupted by her frenetic husband Russ and brother-in-law Mel, who get her into the rough-and-tumble of the trampoline which looks so easy and is so intricate. All three are fine, but Russ, a former Olympic champ, has some heart-stopping tricks that you don’t believe even after you see them.”

To wit, June would be introduced as a straight singer with no mention of trampoline and then would eventually be interrupted and more-or-less dragged into the act as nothing more than part of an elaborate circus joke! And so. . . even though she was not perfecting her art in the places and manner where one usually expects to encounter such activities, during the decade-and-a-half she was part of the act, June probably enacted as much public singing as any other Ella, Doris or Peggy one might care to name.

June died in 1987, and Russ’ brother has also passed away, but husband Russ Rudell lives on to tell me the tale of this rather wonderful (and singular) singer and her career. I was able to find him thanks to the clues finally provided by the aforementioned article. Prior to that, I was unable to uncover any substantial information about June Rudell or her ultra obscure “Sings for Gourmets” lp on the internet via any research tools I utilized. But there are only two Russ Rudells listed in U.S. phone books. And “mine” turned out to be the first one I called. He was immediately helpful.
Posted by Bill Reed at 8:17 AM

never heard of her but I loved what you wrote =)

Owner of the master preferred to let it sit around in the garage gathering dust for another forty years rather than make a "nice piece of change" off of it.