Back to the Ballroom - Buddy Tate & Richie Kamuca "Live" 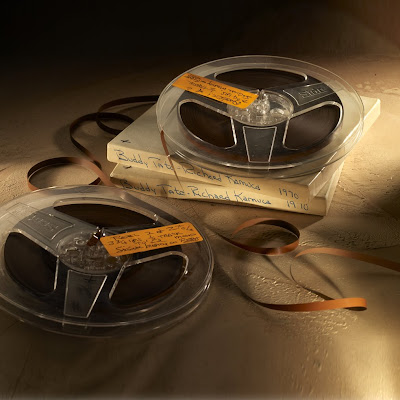 The tapes for this recording were virtually forgotten for forty years until a chance meeting resulted in their finally being brought to light. And now, with the release of this remarkable CD, what went down musically that night at a North Hollywood, CA jazz club [Donte's] four decades ago can, for the first time, finally be heard.

This historic 1970 coming together of Bop’s Richie Kamuca and Swing Era veteran Buddy Tate (Count Basie) turns out to be an intergenerational jazz summit meeting of the first order. Definitely not laid-back, cerebral sounds typical of West Coast jazz, but, rather, scorching tenor playing more along the lines of Dexter Gordon and Wardell Gray’s 1947 “The Hunt.” Or Ellington‘s ‘56 “Diminuendo and Crescendo in Blue.“ It’s the kind of playing that one might have heard in the late ‘40s and 1950s at one of the many U.S. ballrooms that specialized in hot, late night jam sessions. In other words, “cool school” jazz circling back to its raucous pre-bop beginnings. ---Bill Reed

Here's a taste. The other players on the date are: Mundell Lowe, either Monty Budwig (poss.)or Leroy Vinnegar (poss.), and Jake Hanna
For information regarding advance orders, contact Eastwind Import:

1. BROADWAY
2. MACK THE KNIFE
3. YOU DON'T KNOW WHAT LOVE IS
4. JUMPIN' AT THE WOODSIDE
5. MARIANNE
6. MY FUNNY VALENTINE
7. JUMPIN' WITH SYMPHONY SID