Break out the champagne. . . 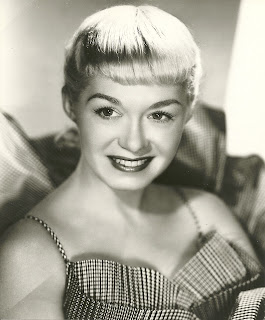 . . .or booze. Today would've been the 85th birthday of June Chiristy. Here's an entry on her from my book, A Fine Romance: My Lifelong Affair with Jazz Singing and Singers.
I know this is going to sound heretical, but I even like June Christy's deeply-flawed last album, Impromptu (1977) better than Something Broadway, Something Latin (1965), her last contractual effort for the House That (Johnny) Mercer built. There are several very ricky-tick tracks on the latter, and the very best cuts on it are by far the most pop-ish things she ever recorded. The first time I heard SBSL, I sensed that the word had come down from on high to either sell out or get out. This was the clearly the result of the label's all-out push to switch over to the new British Invasion and surf music that was selling in "units" never dreamed of just a few years earlier in the heyday of June and her debut best-seller, 1955’s Something Cool, which by 1956 had sold a whopping 93,000 copies (amazing or the times). In other words, SBSL is for diehard completists only. What a wonderful label Capitol had been up to this point in time: exemplified by a very crisp, commercial style of jazz recording. Intelligent compromise of the highest order, if you will. "Compromise" in the sense that, for example, Capitol jazz artists were not noted for "stretching out." Much of their material was in and out in three minutes flat. Also, not a label to turn to for the experimental in music. Perhaps, for these reasons and others,that's why so much of the mid-fifties-to-mid-sixties output of Capitol still sounds so good today: Peggy Lee, Nat Cole, Dakota Staton, Frank Sinatra, George Shearing, Louis and Keely, Ann Richards, Nancy Wilson, June Christy, Stan Kenton, The Four Freshmen et al. all under contract at the same time. (Not to mention master parodist Stan Freberg!) The mind reels!
Beginning Sunday, The 35 Days of Christmas
Posted by Bill Reed at 7:19 AM