I came across this still-timely article while perusing an old desk drawer full of Des Moines Registers this morning (I'm lying. I googled it on the net). It's from 2008.

Before Andy Williams sang solo, he performed with his three older brothers. The Williams Brothers quartet delighted audiences wherever it went.

The boys with the remarkable harmony were born in Wall Lake, then settled in Des Moines before moving to Chicago, Cincinnati and Los Angeles on their journey to fame.

They were the sons of Jay and Florence Williams, and they got their start by singing in a choir at the Presbyterian Church in Wall Lake. When Bob was 14 and Don was 11, they could already envision themselves as a quartet, just as soon as smaller brothers Dick, 8, and Andy, 6, were older.

Why not?" said their dad, a railroad mail clerk. "It's up to you boys. Whatever you want to do, start now, build yourselves up and don't quit until you succeed."

Moving to Des Moines about a year later, the family lived at 3015 Kingman Blvd.

Singing on Des Moines radio, Don Williams recalls today, "We worked so hard. We had a show every morning at 8 a.m. on WHO, and on Saturday we were on the 'Barn Dance.' Sometimes we even had a Sunday show, and we practiced five hours daily."

He adds: "Our voices were quite similar, but Andy sang the top, with Bob below him, then me, singing bass to tenor, and Dick."

The singing parts tended to change as the boys matured into young men.

It was mid-July 1940 when the family packed up its belongings for the move to Chicago and "the break of a lifetime" - a year's contract with radio station WLS. The boys were told they would sing as a quartet but also have the chance to perform solos and duets on the air.

From Chicago, the singing act and their parents moved to Cincinnati. The boys performed on radio station WLW before they set off for Hollywood for a chance at the movies.

In Los Angeles, the boys made their first professional recording, singing with Bing Crosby on the award-winning hit "Swinging on a Star" (1944).

The Williams Brothers had been signed by MGM, but the studio loaned the group out for specialty numbers in movies produced at Warners, RKO and Republic studios. They included "Janie" and "Kansas City Kitty," both in 1944, and "Ladies' Man" in 1947, the same year the quartet appeared with singing star Deanna Durbin in "Something in the Wind." In that movie they first join Donald O'Connor in "The Turntable Song" and slide into the romantic title song with Durbin.

It was at MGM where the Williams boys met one-of-a-kind singer-actress- comedienne Kay Thompson, who told them, "Let's do an act," Don Williams says today. Thompson was then a vocal coach/vocal arranger at MGM.

Don Williams says the act was so packed with entertainment that it was exhausting.

"We rehearsed eight hours a day for three months just to get one hour's worth of material," he says. "We didn't just stand and sing."

In addition to singing ("I Love a Violin," "Clap Your Hands," "Jubilee Time" and "Hello, Hello," among others) the brothers danced and did vignettes with Thompson, who did all the musical arrangements. Top-ranked Bob Alton of MGM did the choreography.

"It was a very popular act," Don Williams says, and drew crowds wherever it played across the nation and overseas. In New York City, legendary columnist Walter Winchell "loved us," Williams says. "He was very taken with the act. He wrote about it every day, or at least it seemed he did."

When the act ended its successful run in 1953, the brothers went their own ways to develop their own solo acts.

Don Williams returned to Los Angeles, where he says he found work on TV, "formed a couple of acts, sang on the Eddie Fisher and Nat King Cole television shows, sang commercials of all kinds" and later opened the then-brand-new Tropicana Hotel in Las Vegas, performing there for two years.

He subsequently became an agent and manager, retiring 20 years ago.

Dick Williams landed on Broadway, says Don, but today lives in Los Angeles, and is still singing as well as writing and conducting.

Andy launched his own spectacular career in New York and is still going strong - at 81 as of Dec. 3 - by performing at his Moon River Theater in Branson, Mo.

Brother Bob, Don says, "got out of the business," joining the boys' father in real estate ventures. Bob is now deceased, as is sister Jane.

Don Williams, 86, and his wife, Jeanne, live in Branson, close to Andy. The brothers also have homes in Palm Springs, where they spend winters.

When Andy Williams had his popular network television show, all of the brothers continued to perform with him on his yearly Christmas specials. "We did about 10 of those," Don says.

Andy, with Don, Dick and sister Jane, visited Wall Lake in 1998 for the dedication of the Williams family home as a historic site and tourist attraction. 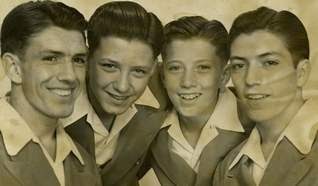 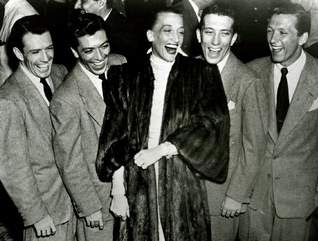 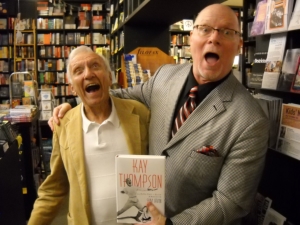 ﻿Dick Williams w/ Kay Thompson author Sam Irvin, last Wednesday night
photo by Stephen Myers
Irvin's book is a wonder. The product of more than ten years of research and writing, and it shows (in a good way). One of the very best show biz books I've ever read, and believe you me, I read more than my share, including (!) Jimmy Savo's Little World, Hello. (Top that!) Kay Thompson is unquestionably the greatest American artist (extracategorically) whom almost no one seems to know. For starters, there probably wouldn't have been a Four Freshmen and the Hi-Lo's were it not for Thompson. Nor a Liza Minnelli. (Welllll.....) Despite all the many years of contributions to various fields of artistry, Kay somehow failed to become "branded." Even most of the soigne, louche  sorts I tend to hang out with don't seem to know who she is. "You know, Eloise." "Duh, oh yeah." Let's hope Irvin's book changes all that.
Posted by Bill Reed at 6:58 AM