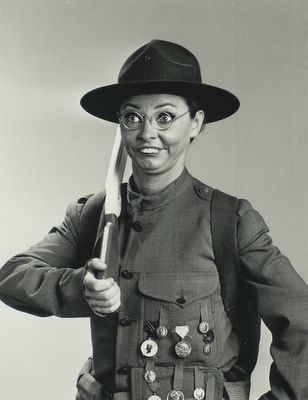 For a brief spell, I thought I had imagined an entire sitcom. It began yesterday when my friend Jay, whose first language is not English, asked me about a possible less blunt synonym for the word "ugly" as a physical attribute. My initial answer was "homely." Upon reflection, however, I decided that in this anti-lookist era, even homely would not pass muster, but the best I could come up with was "plain."

It was "ugly" that set me off and triggered the word "uggeelie," (sic) to begin richocheting about the hallways of the windmills of my mind. Hmmmm? Uggeelie. . .uggeelie?

And then, it all came rushing back to me like, well, a bad dream: a single episode of a situation comedy that I'd seen on TV at least twenty years ago, as part of what I like to call "Unsold Pilot Playhouse." Back in the good old days when the networks actually telecast pilot episodes, ones that weren't being picked up, as summer replacements. I thought I even recalled one of the stars, divine singer-comedienne Mimi Hines.

For those of you too young to remember, or else too unsophisticated to care, Hines was the central figure of one of the great moments of early live TV. I can still recall viewing Mimi and her famous turn on the Jack Paar Show in 1958. A classic case of someone walking onstage an unknown. . . and off four minutes later, A STAR. Paar intro'd her---a totally unheard of quantity; she sang "Till There Was You," from The Music Man whilst her husband Phil Ford accompanied her on clarinet in the background. And the audience went bananas.

Paar began crying after Hines' turn (not so unusual) and as I seem to recall, Mimi and Phil were invited back the next night and the next and the next. . .. It really was something to behold. The cathode ray equivalent of an old Ruby Keeler "Gold Diggers" movie where "Peggy Sawyer" goes out "a chorus girl and comes back a star." Hines really cut through that old fourth wall of the TV screen and leapt right into your living room. And she was no one hit wonder.

In 1965, she replaced Barbra Streisand in the Broadway run of Funny Girl, essentially receiving reviews equal to (some say better than) Babs. And Hines continues to tour and perform: March 29 – April 2 (my birthday) she will be appearing at the toney NYC boite, Feinstein's. But, as is my wont, I digress.

The sitcom in question was called The Uggeelies (not quite certain of that spelling). Get it? The Uglys. In a sort of twist on the Beverly Hillbillies, an entire family of NPA's (to use the onetime code of the Academy Players Directory , i.e. Not Physically Attractive) become uprooted from somewhere in the great heartland and are dropped down in the middle of Beverly Hills and have to cope with not being Beautiful. Not just unsophisticated. But two-bagger ugly. Honest! That was the premise.

Using her pronounced overbite for all it was worth, Hines played up her penchant for looking wacky and ungainly; the kids, as I seem to recall, were nerds, the husband was a dork, etc. I am fairly certain that I'm not misremembering this. Or am I?

The only joke---if that's what it was---that I can still recall was when someone would address Hines as "Mrs. Ugly," she would testily reply, "That's Uggeelie. . .Uggeelie." Can you believe it? Not since the glory days of the Algonquin Round Table! I feel reasonably certain that Hines couldn't believe it, either. But, Hey! a girl's gotta eat.

Still I continued to wonder: Could I possibly have imagined this ghastly parable for our times, i.e. people too ugly to be allowed to live in the Hills of Beverly? Back then, I was still heavy into. . .welllll, never mind.

First, I checked the excellent little book Unsold TV Pilots by Lee Goldberg, but came up with nothing. Next I Googled every possible misspelled permutation of "Ugly" + "Mimi Hines." But, again. . .zip, nada. The Uggeelies appears to be entirely beneath Google radar.

Fortunately, it was at this juncture that I recalled having a slight e-mail acquaintance with an associate of Hines. I wrote him at once: "Was Mimi Hines ever in such a series?," I asked, adding, "And please don't misunderstand me, Mimi Hines is a very attractive woman, but if the occasion calls for it. . .. Meaning that her middle name might just as well be "Anything For a Laugh" (see accompanying photo).

As if to, at least for the moment, restore my faith in the e-mail process (and my sense of sanity), he answered back almost immediately to the effect that yes, Mimi Hines had been in just such a series, and even volunteered that one of her co-stars had been Carol Burnett's TV foil Lyle Waggoner. (Hmmm. Can't recall how the rather hunky Lyle fit in there.) And that's about all he knew. But what I would still like to know is this: Does anyone else remember The Uggeelies, and if so, can they supply me with the name of the "creator" of the series? I tell you, if I had a mind that sick, I could die happy.