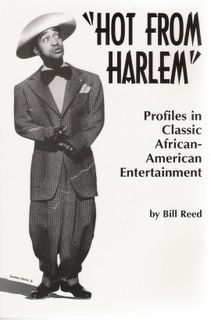 In 1998 I authored a book about the history of black show biz for Temple Univeristy Press, Hot from Harlem: Profiles in Classic African-American Entertainment, which was then cancelled at the last minute when Temple found out that I was white---something I'm not necessarily proud of, but made no attempt to hide. I kept the $5,000 advance and pubbed myself, sold it out and after leaving it lie fallow for the past couple of years am now trying to get reprinted by someone other than myself.

It is a rather fine book, not because I am such a good writer but because the material is so rich and writer-proof. Starts with an overview of minstrelsy, and "our national play" Uncle Tom's Cabin, then moves on decade-by-decade with a chapter on a representative figure from each era. Begins with Will Marion Cook, then Billy McClain, the Whitman Sisters, Valaida Snow, Nora Holt, Billy Strayhorn, Hazel Scott, Dinah Washington, the great (make that GREAT) actress-activist Frances Williams, Sammy Davis, Jr., Demas Dean and Leonard Reed. The final chapter is entitled "Subjects for Further Research" and contains much about black film, along with multifarious other personages and phenomena. I learned a lot about black movies when I curated an exhibit on the subject at the California Afro-American Museum about ten years ago. . . where they knew I was white when they hired me.

I researched Hot from Harlem----the early black press is not indexed----by just going page by page through each issue of the Pittsburgh Courier and Chicago Defender for several decades on microfilm readers. Talk about getting a bad case of mal de mer!

Just now thought I might put H from H on ebay and see if I can sell the last few copies that I have. People have been paying big bucks for it at bookfinder.com. As my racist grandma used to say, "Everything but the oink."