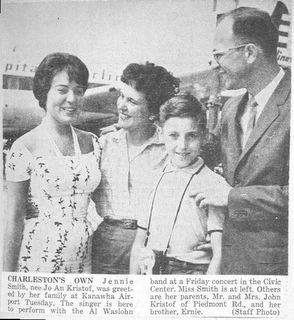 Does anyone know; more importantly, does anybody even care whatever became of all of these mostly late 50s - early 60s jazz or jazz-oriented female singers who (nearly) all have several things in common?:

Most, for example, were "one-album wonders"; some were good (several very good); and after their brief moment of vinyl glory, disappeared without a trace, vanquished, for the most part, by the onslaught of the British Invasion (think "Beatles"). In addition, nearly all were to be heard on labels that didn't have a shelf life much longer than the various singers whose vocal wares in which they trafficked, i.e. Bea Monde, Dawn, Trend, AMR, Edison, Gold Coast. . .and Acme (?).

Also, more than a few bore at least passing stylistic resemblance, replete with those long, long vowels, and husky chest tones just this side of pneumonia, to the (arguably) most influential jazz singer to have successfully come of artistic age in the mid-1950s, Chris Connor. One even has visions of those pretenders to Chris' throne running around the block in the rain before every take in order to insure the proper amount of Connorian plangency.

In almost every instance where I've tried to uncover the denouement of the lives and careers of these various singers, I've come up empty handed. And, in fact, a master list I keep of both male and female "missing in action" singers is much larger than the one included above. Note that I haven't even mentioned all those fallen- below-radar "boy" singers.

Fortunately, over the years, I've been able to remove several from the list. I've learned, for example, that:

Roberta Peck, who had exactly one really terrific album on Columbia, is alive and well and living in New Haven, CN.

Bev Kelly is a psychotherapist in Long Beach, CA and now answers to the name of DOCTOR Bev Kelly. She recently released a new CD.

Cora Lee Day, who also released just one album---on Roulette---turned up living just down the block from me here in L.A. I believe that Cora, who I came to know fairly well, died in 1996 after a successful career in acting (Daughters of the Dust), to which she turned after her brief but spectacularly unsuccessful stab at singing. At least, the Internet Movie Database lists her as deceased, and I never see Cora out front of her house anymore when I drive by, so....

Jo Ann Miller, ended up a very big fish in the smallish pond of regional theatre as a producer. She died last year.

Nanci Malcomb (Vik Records, class of '58) became a legal secretary, which is something I learned when I was introduced to her at a San Fernando jazz club recently ("NANCI MALCOMB!!!"). Thus, enabling me to cross her off my MIA list.

Toni Lee Scott, an absolutely terrific singer until recently with---you guessed it---just one album to her credit, on Fred Astaire's Ava label. She is now living in the Northwest, and not long ago---after a near forty-years hiatus---released her sophomore disc effort. I haven't heard it yet, but if it's half as good as the Ava....

Laurie Allyn is, perhaps, the oddest example of all, having had an album recorded 48 years ago just recently see the light of day on the VSOP label. In '57, she had gone home to Texas for visit, while there got wind of the fact that her label had folded in advance of the release of her album, and somehow she just never made it back to L.A. For the record, it is a first-rate Marty Paich-arranged effort. Worth the wait!

Ironically, two of the most elusive singers for me turned out to be from my home town of Charleston, West (by god) Virginia: the aforementioned Janet Brace (without a trace), and Jennie Smith, who, with her four lps and a skosh of singles, was never that obscure. Charleston is not an especially large town, and few jazz singers come from there. In fact, hardly anyone ever leaves there. But Jennie Smith proved really tough to track down!

I even went so far as to write every likely Kristof (Smith's real surname) in the U.S.---not too many of them---trying to find her. I never heard back. But I am like a dog with a bone in such regards, i.e. I don't give up easily. Finally, Bob Lilley, a chap with a West Virginia Radio web site, supplied me with the email address of Smith's brother, and the rest is history. Recently, I even received a nice email from Jennie.

To paraphrase my grandma, "If Jennie Smith'd been a snake she'da bit me," for this former hometown girl made good from Charleston, WV is, as revealed in her email to me, retired, and married AND living right here in L.A.

I should add that my appreciation for Smith's somewhat slight but significant ouevre, especially the two albums she cut with the brilliant arranger Ray ("Lady in Satin") Ellis, for RCA in 1957 and Columbia 1959 (no Acme Records for our Ms. Smith), simply knows no bounds. The lps with Ellis are as different from one another as day from night, but both IMHO are ***** efforts. And I'm not just saying that because Smith and I first saw the light of day in adjoining hollers.

It should come as no surprise that Jennie Smith continues to have an especially strong fan base in Japan---foremost arbiters in such matters---where her first album, simply called Jennie (notice that I didn't use the word "eponymous") has mostly remained in print on CD for a number of years.

Just to insure that NO ONE will ever again come up empty handed when Googling for information about this wonderful singer (the net is surprisingly bereft of same), here is a list of other key words that will almost surely guarantee landing on this page whenever anyone sets out to discover "Whatever Happened to Jennie Smith?":

Jo Ann Kristof (Jennie's real name), Steve Allen (a longtime TV employer), "Love Among the Young" (the title of her RCA album), the "Hollywood Palace" (another important TV credit), West Virginia dee-jay Hugh McPherson (an early mentor), Lionel Hampton (her first employer. . .not too shabby), Look Magazine (they once ran a nice feature on Smith when she first landed on the shores of NYC), Chevrolet (she was Mrs. Chevrolet to singer Frankie Randall's Mister C. in an ad campaign), Mort Garson (the arranger of her third album), Donn Trenner (arr. for her fourth lp).

Now. . .if I could only figure out whatever happened to good ole West Virginia gal Janet Brace, whose one One ONE lp, "Special Delivery" (1956), is still available on CD in---natch---Japan.

Thanks for tracking Nancie Malcomb
and Jenni Smith. I still love
their albums from the 50's.
Now if you could only find out
about Terry Morel. She also had
only one album, I think, on
Bethlehem BCP-47. I have a copy
of it.
Also, you haven't been able to
track down Marlene Cord?
Terry and Marlene actually had
fairly good voices. They weren't
Beverly Kenney, but they were
OK.

A quick google on the net reveals the following:

I am looking for information on a singer named Carol McCracken. I don't know if she even recorded at all! She was an extra in the film The Wild One (Brando) and, apparently, sang with either Kenton or Herman.

Glad to hear others appreciate Nancie Malcomb. I have original vinyl of West Coast of Broadway I've carried for many moves over 40 years. Hmm. Maybe 50. Her mother was my 4th grade teacher in San Bernardino, but I discovered that after my step-dad introduced me to her music. If any fan would prize this album, just let me know and I'll send it on. I'm bratton616@sbcglobal.net.

its been some years since you wrote this, but I would really like to know whatever happened to singer Cathy Hayes, who cut the album "It's All Right With Me" which I love. Thanks :)

Ms. Hayes is alive and well and living in Colorado. I believe she's retired from "the biz."

I know this is an old post, but I'd really appreciate if you get any data of the whereabouts of HONI GORDON. I love her only record and would like to know if she's still alive and where she lives- Thanks from Buenos Aires, Argentina

Tracked her as recently as 2002 singing at a cultural event at the Elizabeth, NJ public library with a pianist by the name of Wayne Van Van Cortlandt Smith.

Make that just one "Van."

Came across this while looking for info on Charlene Bartley; I also have a dub of a Bea Abbott LP some blogger made. Who the heck were these people? Here's a whole photo gallery of 50s songbird LPs: DigitalRecording@MomoHama. I've come across some of these gals, the ones that aren't household names that is, at Mr. Kelly's that is...Anita O'Day, sure. Pat O'Day? Not so much.

Jennie Smith seems to exist now as this blog entry, a few Google hits, a few eBay LPs, a few things on YouTube. Those cuts on YT make me wish someone would cough up a reissue. I also found this interview - one of 4! - on another blog which mentions Jennie at the end - Classic Television Showbiz: An Interview with Pete Barbutti - Part Two. Barbutti's a study in of himself too. A friend from Scranton told me about Pete would play "Cute" by Neal Hefti, and puff on his cigar in time...tried to find footage of that but alas no luck.

There's a very inexpensive download on amazon of most of Jennie's Smith's wonderful quartet of Lps. Golden Crest (Pat O'Day) was a very obscure, but quite good label. Any vocalist on that label is worth a shot w/o even hearing. A outfit (no names please) in Spain has just released the compleat Bea Abbott. I don't believe Bartley did much recording (couple of singles) beyond her RCA album. Too bad. . .she terrific. Underlines my belief that just a about everybody used to know how to swing. And if they also happened to swing---wellllll. . .

Thank you for this great article. I care!