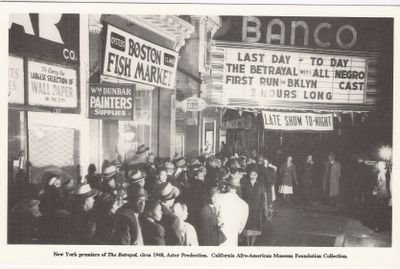 This is the post card sent in conjunction with two simultaneous exhibitions I curated in 1992 at the California Afro-American (now "African-American") Museum: Midnight Ramble: Seventy-five Years of African-American Movie Poster Art and Hollywood Days, Harlem Nights: African-American Entertainment in Los Angeles, 1940-1952. Ironically, this photo of a Brooklyn showing ---"last" and only day---of legendary black filmmaker Oscar Micheaux's final film, The Betrayal (1948), survives while the film is lost. And yet, silent films of his from the Twenties did withstand falling through the cracks of time. Note that the banner outside the theater proudly announces that the film is "3 Hours Long." A sure mark of quality! The post card incorrectly notes this is the New York premiere of the film, when it's initial showing was at midtown Manhattan's Mansfield Theatre.

My friend, actress-activist Frances E. Williams, appeared in two of Micheaux's screen melodramas, Lying Lips (1939) and The Notorious Elinor Lee (1940). The director's film's were notoriously low-budgeted affairs, and Langston Hughes while viewing Lying Lips at a theater with Williams one day and upon noting that in the movie she smoked non-filtered Camels all the way down to the end, turned to her and whispered, "What was your budget? Couldn't they even afford to buy you any cigarettes?"
Posted by Bill Reed at 10:29 PM