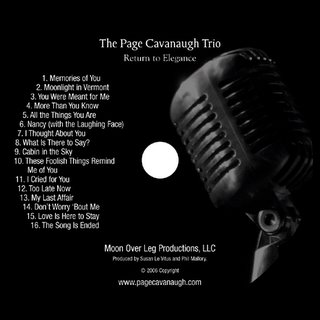 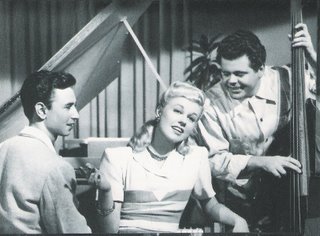 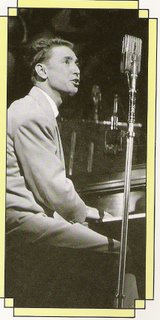 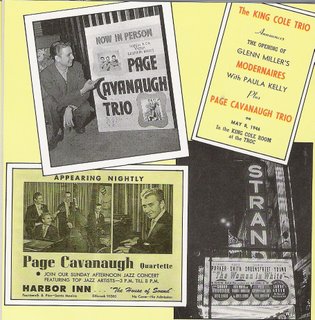 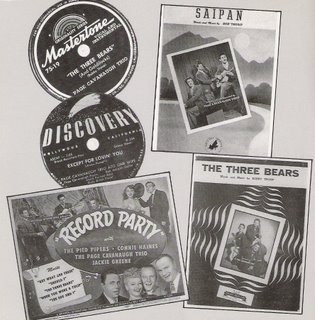 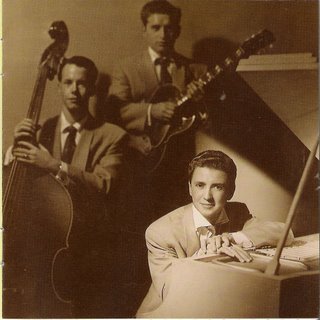 During the mid-1940s to early-'50s, Page Cavanaugh was more of a household name than he is this century. So much so, there's little doubt that when, in 1948 prior to starting to film her first feature, Romance on the High Seas, Doris Day was informed that Page would be her musical co-star in the production, she probably couldn't sleep or eat for a week. That's how big a deal he was back then.

Beginning in the mid-1940s, Page---along with Nat King Cole, Bobby Troup, Matt Dennis and Joe Mooney---played a major role in putting a whole new spin on the jazzier side of American Popular Music. Almost overnight, it had a lighter, breezier sound. Eventually, Cole became the most famous of the lot, and Cavanaugh, arguably, the least. Part of the "problem" (if that's what it is) is that, as the now octogenarian Page has probably been heard to say on more than one occasion: "I don't take meetings. I just play music." In other words, he hasn't much patience with all of the extra-musical considerations that go along with maintaining a career. But it's paid off in the long run. Over the last half-century, Page---especially in the Los Angeles area---has had all the work he can handle, appearing with his various (mostly) small group configurations in some of more swellegant locales in town. And, on occasion. . .well, a guy's gotta eat. If I had any say-so in the matter, for services above and beyond the call of duty to American music, he should receive the Kennedy Center honors. Instead, he's just. . .booked. Right now he commutes multiple times weekly back and forth between the lounge at the posh Tower Hotel lounge on the Sunset Strip and Orange County's Balboa Bay Club.

And pianist-whisper vocalist Cavanaugh (he loves that appellation) has a new CD, Return to Elegance, that is just about to be released. I've heard an advance copy, and it's one of the finest not only of his but anyone else's career. Here's just a brief snippet of the opening track. That does not sound like the playing of an 84-year-old. More like a 24-year-old.

Return to Elegance is the icing on the cake of his 60 + years distinguished recording career. I'll be writing more about it here in days to come, along with the inclusion of a few audio snippets, and ordering information.
Posted by Bill Reed at 12:01 PM