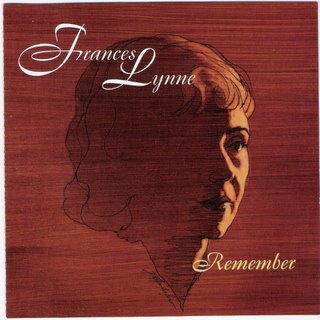 Today is the birthday of former Woody Herman trumpet player, John Coppola. For a while now I've been looking for an excuse to upload a track from a very nice CD that came my way not long ago. And I guess Coppola's birthday is my pretext. Not that I should need any special reason for posting an mp3 as nice as the one that follows below.

The recording is singer Frances Lynne's Remember, with the JOHN COPPOLA (!) Orchestra, and it came my way as a result of doing liner note research for the release of Bill Black's Down in the Depths CD.
Lynne was the last "girl singer" with the Gene Krupa band; Black was her male opposite number.

When I set out to find her, I began by googling "Frances Lynne" + singer , and much to my surprise, I came across a reference to her very quickly. She was alive and well and living in the Bay Area of Northern California. I also made telephone contact with Lynne and her husband, Coppola, in similar record time. Mere minutes! Alas, I quickly realized she didn't have a lot to add to what I already knew about Black. "Nice guy," etc.

But the good news was that more than a half-century later, Lynne is still singing. And quite nicely, too, as is evidenced by the results of a CD she and Coppola had recorded in '99 and of which they eventually sent me a copy.

For a project that is so far beneath radar (unlike Lynne herself, I can find no mention of the recording on the net) this certainly is one classy affair. The piano, arrangements and production are by Mike Abene, and other players include the rather vaunted likes of Johnny Coles, Herbie Steward, and Coppola. The recordist for the first half of the album is the noted Phil Edwards. The twelve-song selection is equally impressive, including: 'I Get Along Without You Very Well," "Last Night When We Were Young," "Can I Forget You?," and a real Harry Warren - Ralph Blane rarity, "Spring Isn't Everything."

Granted Ms. Lynne might be a shade lacking in sheer vocal production---she was probably pushin' un certain age when she recorded this. She also sang with Dave Brubeck (he and wife Iola did the liner notes for the CD) before he was famous, so you do the math. But however much she might be missing in vocal power, she more than makes up for in interpretive skill, pitch, swing, taste. All the really important singing stuff!

I also spoke with John Coppola, and he patiently and courteously answered the question---probably for the ten-thousandth time--- that I posed to him regarding his possible relationship to filmmaker Frances Ford Coppola to the effect that: "I think we're distantly related." The Coppolas turned out to be a lively, intelligent couple.

As noted above, I can find no mention of this recording anywhere on the net. But I have a hunch that if you are interested in acquiring it, you just might be able to do so by writing to the address on the back of the CD: Lark Records, 2079 Fulton Street, San Francisco, CA 94117. Even though they won't know what the hell you're talking about, just tell 'em that Dr. Chilledair sent you.

Here's Frances Lynne's "Let's Face the Music and Dance" from Remember. (mp3 links for a limited time only)