In Memoriam Ten Years On 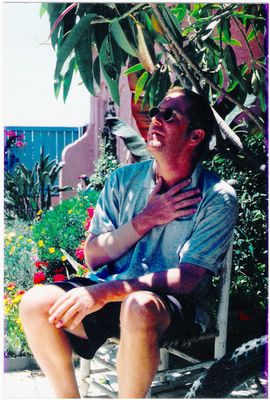 On his Fablog today, my good friend and constant travelling companion David Ehrenstein has written a memorial to our friend Richard Rouilard (aka Bunny Mars), who died ten years ago today in 1996. Reading it caused me to mist up a bit, but I've been know to cry at the opening of an envelope. The last words of Rouilard to me, a couple of days before he passed, were: "Look after David. He needs a lot of special handling." He winked at me and smiled. It was intended more-or-less as a joke. But not entirely so.

Richard was without question the most unforgettable larger-than-life character I ever met. Generous, witty, thoughtful, outrageous, campy, brilliant, loving. . .all those good upside things and more, and no downside of which I'm aware. We all had to wear yachting hats on the boat when his ashes were scattered. And when that happened, a flock of sea gulls swooped down from on high and did a flyover of his cremated remains, then disappeared back into the sky as quickly as they had made their appearance. I swear!
Posted by Bill Reed at 4:29 PM