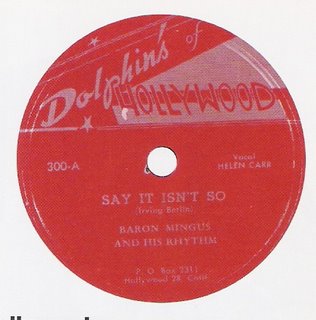 A reader from Ithaca, NY---let's call him Mister X--- writes in to ask:

I appreciate your website. I was wondering if you have written about Helen Carr? Biographical data about her is very hard to find.

I have not written about the very fine Carr, but I don't find a great lack of info about her. The big problem seems to be contradictory stories as to the cause of her death. The journalist Scott Yanow wrote the following
on the net in 2003:

"She was born in 1922 or 1924 in Salt Lake City. Carr recorded "Say It Isn't So" with Charles Mingus in 1946 in Los Angeles. She married pianist-arranger Donn Trenner and worked with him in a group called The Donn Trio And Helen. She sang for short periods of time
with the big bands of Charlie Barnet (there is a Snader transcription film clip of her singing "My Old Flame"), Georgie Auld, Chuck Foster, Skinnay Ennis, Stan Kenton (for one month in 1952) and Buddy Morrow. She sat in with Charlie Parker a couple times [there is a photo of at least one of the occasions] and made two albums for Bethlehem; one in a quintet with trumpeter Don Fagerquist, altoist Charlie Mariano, Donn Trenner, bassist Max Bennett and drummer Stan Levey, and one with a trio comprised of trumpeter Cappy Lewis, guitarist Howard Roberts and bassist Red Mitchell. These are either from 1953 and 1954 or both from 1955, depending on the discography one looks at. They have been reissued on a single CD (The Complete Bethlehem Collection) and find her displaying a soft voice that at times sounds eerily like Norah Jones (!) although the music is much more jazz-oriented and her phrasing is influenced by Billie Holiday. Her only other recordings were two songs with Max Bennett in 1955 and two cuts on an Atco single in 1958 (Ific/YouMade Me Love You) released under King Curtis' name; I've never heard the latter. Helen Carr died sometime in 1960, either from a car accident or breast cancer. I have three sources apiece for both of those."

The Bethlehem two-fer also contains a lot of info, but nothing there---I seem to recall---about the cause of death. I don't know why Yanow didn't just call Carr's husband, Trenner. He's in the book.