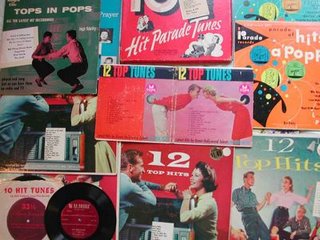 There's a great deal of excellent music to be found lurking within the grooves of all those budget LPs from the 1950s, i.e Tops, Hit Hits Hooray, Waldorf Music Hall, etc. You know the kind; the ones that offered 12 top hits for a buck-forty-nine by "Great Hollywood Vocalists and Orchestras" that no one, for the most part, has ever heard of. I bought them in high school because we were so poor we had to eat the family dog. Sometimes, though, the performers were not so obscure. And the recordings often weren't half bad at all. Themes From the Movies (Tops L1519) is one I've long kept my eyes open for during my regular thrift shop perambulations. I finally found it last week at the Jewish Women's Council Thrift Shop on Fairfax in L.A. (along with a clean copy of Sammy Davis' LP All the Way and Then Some) both for a buck each, if you must know. I've been looking for the album because it contains two tracks by the nowadays somewhat forgotten, but nonetheless quite fabulous crooner Ronnie Deauville. Kind of a sad story there, and with a bittersweet ending. But he sounds terrific on his two tracks, "Young at Heart" and "Three Coins in the Fountain" from "Themes from. . .." Obviously meant to evoke Sinatra, but Deauville is clearly his own man here.