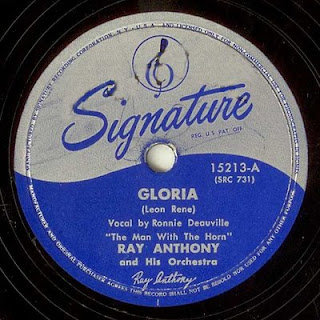 "Gloria" was a hit recording for Deauville whose name, alas, was not "above the title" on the label and who had departed the band by the time this charted in 1949.
Five years after Ronnie recorded it in 1949 (other versions were by the Mills Brothers and Herb Jeffries), this Leon Rene song became a major doo-wop hit for the group The Cadillacs. Many other versions in that vein followed thus effectively overshadowing the song's original romantic ballad style.

There's also one other new R.D track at 10", which in this instance refers to 10 inch 78s and not that recommended site's usual staple of LPs of that configuration.
Posted by Bill Reed at 6:43 AM

Thanks Bill for your work on this. I still have to find my transfers from the LPs and will mail them to you when I get them. I hope you can eventually compile these singles as a "lossless" (non-MP3)disc when enough have been gathered.

I did a 3 hour radio special on Danny Kaye last night. It's too bad he didn't record more ballads.