A has-been under TWO names 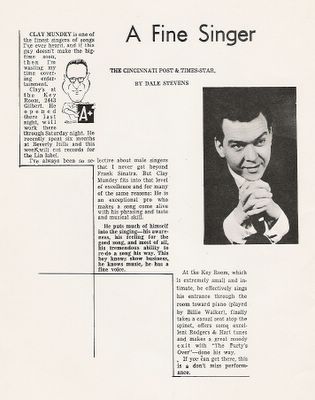 By the late 50s, singer Bill Black, on the run from the mob, had fully inhabited his new persona of "Clay Mundey." And when, around that time, influential midwestern music critic Dale Stevens informed that, in essence, he would eat his shorts if Mundey didn't become the next big thing, he apparently had no idea that he was writing about the very same performer of whom, less than a decade earlier, major jazz critic George T. Simon had written:

"Right now Gene Krupa has himself a fine singer and a fine performer. I have a hunch that sometime in the future he's going to garner a little additional glory of the reflected variety from Bill Black."

Both men were very right about Black/Mundey's artistry, but couldn't have been wronger about the fact that he would soon arrive. He finally does---sort of---when M&I Records (Japan) issues his posthumous CD, Down in the Depths on August 25th. Too bad there's no heaven, no hell (t'ain't ya know) from which he can observe his belated digital transcenendence.

I suppose I'll never get over wondering what it was that caused Bill Black to run so fast, so far from the long arm of the organized crime "wing" of the record biz.