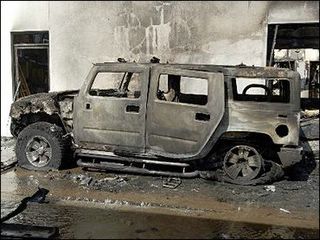 Last night on TV I saw a graph representing the rise in the temperature of the world oceans over the last thirty years. Overlaid on top was another graph depicting the upsurge in the intensity of hurricanes worldwide over the same period. Guess what? There was an exact correlation!

Thus, if these stats are a result of global warming, and recent studies almost inarguably suggest that they are, then one can only come to one conclusion. . .if not solution. And that is that the blood of Louisiana hurricane victims AND 29,990 innocent Iraqi civilians is directly on the hands of gas-guzzling SUV and (especially) Hummer owners, of which the current pig-like governor of California---whose name I cannot even bring myself to utter---owns seven!

Increasingly, as I roam the California highways and byways, I note the drivers of Hummers (invariably on cell phones) staring straight ahead as they plow along their merry way. It is almost as it they are trying to avoid rude stares from drivers of the more fuel efficient vehicles around them? But inasmuch as they are all, most likely, conscienceless, that is doubtful.

I can recall a time, not so long ago, when the citizenry of the U.S. were all competing with one another to see who could drive the most fuel efficient vehicle. Now it is just the opposite! It's a (brave) new world.

I wonder if hurricane Katrina will turn out to be the wakeup call of global warning? Also. . .doubtful.

What will it take?