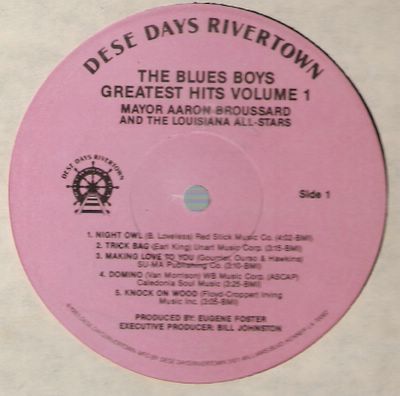 Who knew that one of the high profile Louisana heroes of Hurricane Katrina, Jefferson Parrish President and former mayor of Kenner, Louisiana, Aaron Brousard, is also a fine rhythm and blues singer?

When I saw him on Meet the Press two weeks ago angrily lamenting the failure of the national government to act in a timely manner in the face of Katrina, I knew his name rang a bell.

And sure enough, digging through my LP collection I came up with an ultra rare disc---circa the 1980s---of the then-mayor recording with a who's who contingent of New Orleans instrumentalists and singers, including: John Fred, Earl King, Chuck Carbo, Frankie Dent, Bobby Loveless, Oliver Morgan, Lee Dorsey, Ernie K-Doe, and the the Dixie Cups.

It was released on the fine fine superfine Dese Days Rivertown Records label. Since there's no catalogue number, one presumes that it was a one-off.

As with an inordinate number of the LPs in my semi-vast, and near-psychotically eclectic collection, I still have sense memory of buying this particular disc. . .about five years ago at an L.A. Goodwill store.

Several factors were involved in my picking it up from the Goodwill record gondola in the first place, the main one being the extreme indie "look" of the jacket.

I have never been able to ascertain the exact provenance of the disc, but inasmuch as side two is devoted to the soul stylings of the owner of a Louisiana car dealership, I'm guessing that it was some sort of promotional item. Of course, no record collector with half a brain would turn down a disc sporting such an array of "guest stars", and so I plunked down my handful of sheckels and went on my mary way.

Later that day attempting to research the disc on the net, I could not only not find a single reference to it, but only a handful of "hits" for Broussard. Since then, after Katrina, that figure has multiplied astronomically. As of today, 33, 200 and rising. . .even as the waters in Jefferson Parrish recede.

Then this a.m., watching Broussard on TV again (impressive and moving as ever) it dawned on me that a good way to not only help Gulf Coasters, but also to pay part of my astronomical monthly Kaiser Permanente (when is Michael Moore going to finish that expose on health care providers?) insurance premium might be to sell the LP on Ebay. . . with a starting bid of 9.99.

Broussard's tracks on the disc (side one only) are: Night Owl, Trickbag, Making Love to You, Domino, and Knock on Wood. And while that other Aaron has nothing to fear, let's just say that the Pres is a quite capable performer, enough so to make me wonder if he ever actually had (or ever considered) a professional career as a singer.