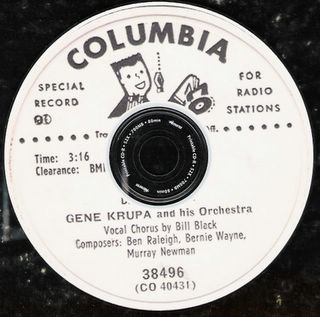 Of the twenty-eight live recordings that "boy singer" Bill Black made with the Gene Krupa band, the one that kept bothering me was the title song (link for a limited time only) from the 1949 film Tulsa. Black performed it twice with Krupa in performances that were captured by air checks, both in the month of April '49 just before the film was released in May. Although inarguably not a top notch song in the league of Gershwin, Porter, Berlin et al, nevertheless, even in these two raw '49 air checks, one can hear that the number by Mort Greene and Allie Wrubel had "hit" (in the songplugger parlance of the times) "written all over it." A nice kind of bouncy "On the Trail" feel.

Then, like a bolt from the blue this a.m., it suddenly dawned on me as to WHY this hit song wannabe was never recorded in the studio. . .because there were no commercial sides made between December 1947 and September 1949 due to a musicians union strike. Duhhhh! And to the best of knowledge the number was never recorded by anyone.

Once Black moved out of St. Louis in mid-1948 intent on making it in the big time, because of the recording ban, the cards were stacked against from the instant he first touched down on Manhattan soil. Eventually, after the strike was over, he did cut a few tracks with the Gene Krupa band, but none of them were as remotely good as "Tulsa." The mob attack on Black that made him hors de combat for a couple of years in the early 1950s was just--so to speak--- the icing on the cake. Poor schmuck!

I don't have a copy of the film at hand, but I wouldn't even be surprised to learn that Black sang the song over the opening or end credits. And one wonders just how many others careers were similarly derailed by that '48-'49 work stoppage.
Posted by Bill Reed at 10:03 AM

I love yr sleuthing abilities. now get cracking on that Black Dahlia case...