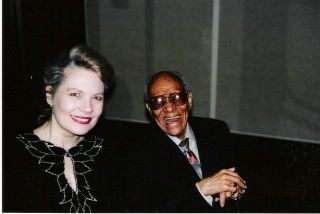 Fayard Nicholas and his wife, Katherine Hopkins-Nicholas, May 2005 (photographed by David Ehrenstein)

I am happy to count among my friends the great dancer, Fayard Nicholas, who died today.

I don’t think I will ever forget a single moment I spent with him. The first time I met him was 15 years or so ago. I scheduled a luncheon appointment to interview him about Dinah Washington. Much to my surprise and sorrow, the years of doing all of those incredible terpsichorean pyrotechnics had taken their toll. I can still remember my shock and sadness as he crossed the street to meet me. He had to support himself with two canes! But THEN about six months later, he had that miraculous hip replacement surgery, and I was there when he danced in performance again for the first time. I get all verklempt just thinking about it.

We remained friends over the years and in 1998 I interviewed for my book “Hot from Harlem: Profiles in Classic African-American Entertainment.” Here's a portion of the profile I wrote about Fayard and his brother Harold.

“In 1936 the Cotton Club--- founded by gangster elements in 1923 at the comer of 142nd Street and Lenox Avenues---moved downtown to the Broadway-Times Square area. Everything else, though, remained pretty much unchanged; including the feathers and fans, and legs flying non-stop to great music by Ellington and Calloway, et al. Another tradition that stayed the same was the painful reality of the Club's whites-only policy, by which the blacks entertaining there could not afford to become too distracted. But the dancing Nicholas Brothers may have even been moving too fast, and been too young to notice the glaring irony of it all. A sensation almost from the moment they turned professional in 1930, by 1937 when the Nicholas Brothers starred in Tall, Tan and Terrific at the Cotton Club---at the respective ages of 18 and 14--- Fayard and Harold were already old hands at the glamorous night spot, having first taken the place by storm uptown in Harlem five years earlier.

"When we did Tall, Tan and Terrific at the Cotton Club in 1937, Harold and I were doubling. We were in Babes in Arms AND the Cotton Club show as well," Fayard remembers. "We only had a few days to rehearse for the Cotton Club, but during that time George Ballanchine, who choreographed Babes in Arms, came to the club to watch us work, I seem to recall. It was really something doing both shows at the same time. After we finished Babes in Arms at the Shubert we went to the Cotton Club to do the midnight show. We had a tutor and went to school every day. We would get home so late that we'd sleep until early afternoon. The tutor would come at three o'clock in the afternoon and after we finished we went back to bed."

Fayard Nicholas recalls that---because of their youth---he and brother Harold may have been among the few of her fellow performers at the Cotton Club to have ever seen a sweeter side to Ethel Waters. One of the handful of American entertainers unquestionably deserving of the term "legendary," Waters behind the scenes was equally as noted for her dark moods and unpredictable temperament as she was for her stunning interpretations of songs. Nicholas speculates:

"She liked us because we were kids and didn't represent the same kind of threat that adults did. She called us her boys. She didn't mind us getting a lot of applause. At least, not too much. But anybody else. . .oh, man! I remember one night at the Cotton Club they were doing a tribute to Bill Robinson and she was there, all the Broadway and movie stars were there to greet Bill Robinson. I was sitting in the box with her and Bill was on the stage. He said, 'I would like to say a word about my good friend Ethel Waters. Ethel, who would have believed that you and I would be the leaders of our race?' She lit up, stood up and said, 'Oh, thank you, thank you.' And people applauded. I said to myself, 'This is great, this is great, they're finally friends.' And then she went back stage. I stayed in the box. A little while after that, Bill came over to my table and said to me, 'Can you imagine that?' I said, 'What?,' And he said, 'After I praised her, she came backstage and still called me a son of a bitch.'"

If anything did change with the relocation [of the Cotton Club from Harlem] to the Times Square area. it was the caliber of the entertainers, which became greater than ever. Louis Armstrong, had never appeared at the Cotton Club when it was in Harlem, but at the Broadway and 48th location he became a regular along Ethel Waters, Duke Ellington,
Cab Calloway and Bill "Bojangles" Robinson. For Tall. Tan and Terrific, the Club's show for the Fall of '37, (an engagement he eventually had to postpone), Robinson was to receive $3,500 a week, more money than anyone had ever been paid before for a nightclub appearance, regardless of race. As for the mob element-led by the notorious OwneyMadden-involved in the running of the Cotton Club: "Yes, it's true they were gangsters," says Fayard Nicholas who laughs, adding, "But they were nice gangsters."

Think about any and all of the positive attributes we use to describe the best qualities that humans can possess: wit, kindness, intelligence, compassion, generosity, hipness. . .genius, etc. Fayard had every last one of those attributes in abundance. Very high! Very evolved!
Posted by Bill Reed at 5:56 PM