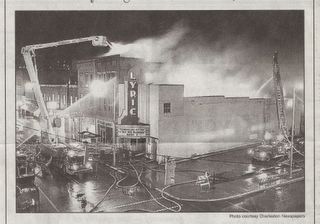 Two or three times a year my sister, who still lives in my hometown of Charleston, WEST (bygod) Virginia sends me a big whomping mess 'o clippings from the two local newspaper, the Gazette and the Daily Mail. Included in the latest batch, received a couple of days ago, was an article about the funeral of cult rockabilly legend Hasil Atkins (attendees included the great "Dancing Outlaw" Jesco White), and various other puff pieces about hometown girls-made good---I'm so prouddddd---Conchatta Ferrell, Jennifer Garner, Ann Magnuson, and Skytriss.

But the clipping that brought it all rushing back to me was a photo, in the 10/17/05 column of Charleston landmark historian Richard Andre, of the 1975 Lyric Theatre fire that wiped out the old place for good. He wrote, in part: "From the 1930s up until the 1960s, the Lyric was a respectable place where the kids went to watch the good guys win and John Wayne storm 'The Sands of Iwo Jima'. . .Sadly in the 1970s, the small theatre became a porno palace as the marquee declared 'Teenage Sex Kittens'." The "respectable," part notwithstanding, I wrote about the Lyric in my 2000 memoir Early Plastic as follows:

"In addition to the Rialto, there were approximately twenty other smaller, second-run, double-feature neighborhood theaters in Charleston, including two-the Greenbriar and Lyric---on infamous Summers Street, which were parentally off limits to all but trashiest of local youth due to their regional resemblance to Bowery grindhouses. What it was we were supposed to be avoiding was never exactly spelled out to us by our parents, but had something to do with rats nibbling on your toes and about winos (perhaps nibbling on other parts of your anatomy). The Greenbriar was where they played producer Kroger Babb's cycle of films, including Mom and Dad---"separate showings for men and women and a nurse attendance at all times"--which seemed to come around every six months or so. Occasionally, the Greenbrier even got religion when local church groups "four-walled" the place for showings of regionally-filmed, cheesy bible pageants featuring cross-eyed Jesuses and hillbilly Marys. These were a genre unto themselves.

The Lyric was topheavy on westems, and when the bus from the coal mine camps pulled up in front on weekends, nearly all the passengers would empty out into it in an ant-like trail. In his essay on the movies, "The Devil Finds Work," James Baldwin observed that people did not go to see Humphrey Bogart as Sam Spade, but Sam Spade as Humphrey Bogart. If that's true, then were these obscure (to me) Vera Hruba Ralstons and Jane Frazees advertised on the one-sheets outside the sub-respectable Lyric and Greenbriar where Monogram and Republic films had their local premieres? Who were these Weaver Brothers and Elviry, and the Three Mesquiteers? I was destined never to find out. Only when the original Godzilla premiered at the Greenbriar---and I was fairly along in my teens---did I dare enter its dreaded inner sanctum. In the final analysis, my upcoming loss of virginity proved easier than my belated first visit to this long-maligned movie house. A childhood's worth of parental bad press accorded the Greenbriar died hard while my heart beat like a hammer as I skulked my way into the place and found a seat. I felt rejected when the movie was over and I had not been advanced upon by a single one among the Raincoat Brigade's number. For as long as I could remember, authority figures kept warning me about a dangerous strangers at the Greenbriar, Lyric and elsewhere, but none ever materialized.

A few years after I saw Godzilla at the Greenbriar, I finally succumbed to the lure of the Lyric when a triple bill of Joy House (Lola Albright and Alain Delon!), Who's Been Sleeping in My Bed (Dean Martin and Carol Burnett!), and Lady in a Cage (Olivia De Havilland and James Caan!), whose scandalous reputation preceded it (but which no other theater in town would exhibit) proved too much for me to resist. The experience proved well worth all the alleged rats scampering over my feet and the gum stuck to my shoe soles it cost me to view this bizarre triple bill during my maiden foray to Charleston’s notorious Lyric which, fittingly, not long after that became the first theater in town to go Triple-X."
Posted by Bill Reed at 12:00 AM