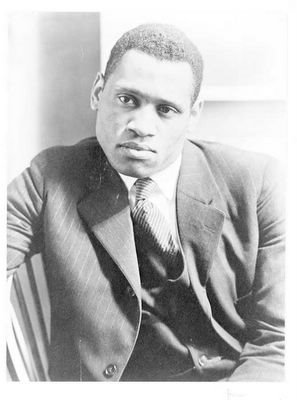 I have always found it a bit perplexing that African-American musician Hazel Scott has never been given the proper credit she deserves for taking on the House Un-American Activities Committee several years in advance of Edward R. Murrow's widely-heralded attack on Joseph McCarthy (see Good Night, and Good Luck). But that's another story. I find it almost as odd that another of the bravest acts committed against mid-century Communist witch-hunting, enacted by Paul Robeson, has also been given scant shrift in the history of such, ahem, activities. It happened in 1949 when my friend, the late actress-activist Frances E. Williams, produced a rally in support of then-beleagured Renaissance man Robeson at Los Angeles' Embassy Theater. Muzzled by the government from giving a political speech, Robeson sang his message to the accompaniment of a string quartet. Federal agents stationed around the auditorium were either powerless to stop him or else, too slow up on the uptake to realize what was going on. Would that make a great scene in a movie or what? Here is an audio recollection of the occasion by musician Buddy Collette--something of a political pioneer himself---who was on hand to witness, and take part in, Robeson's surreally seditious act. It is taken from Buddy's CD, A Jazz Audio Biography. (mp3 links for a limited time only).
Posted by Bill Reed at 9:14 AM