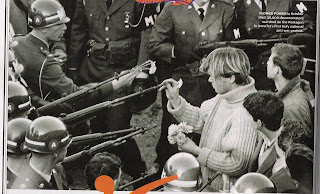 The hot blonde sticking the flowers in the rifle was later known as "Hibiscus" of the fabulous Cockettes.

Back in 1967, on his way to San Francisco with his boyfriend Irving Rosenthal, he stopped to join this famous anti-war demo and in the process Invented Flower Power.

Being that its run by a bunch of weenies , Rolling Stone , which reprinted this classic pic in their current tribute to the sixties, failed to not this very important historical fact.