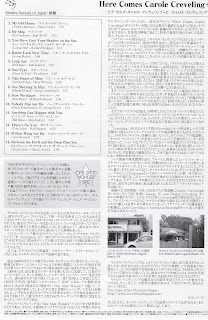 _____________________
Just received this month's batch of SSJ Records (Japan) releases, which the Blogspot Full Disclosure ACT of 2004 (or was it '05?) compels me to admit my participation in the production of same. The crown jewel of the lot, as far as I'm concerned, is the CD issue of the ultra-obscure 1950s vocal LP, "Here Comes Carole Creveling." Heretofore, I've only had access to copies of the LP that sound as if they'd been left out in the sun for a week and then run over by a Mack truck. But SSJ's crack engineering staff of one has done a terific job of restoring the recording and it's great to hear Creveling for the first time in all her full-blown vocal glory. And all I can say is. . .WOW! For those of you who are unfamiliar with Creveling lore, she is a singer who made one recording---and an excellent one it is---and then vanished from the face of the earth without a trace,
I've yet to crack the riddle of Creveling: the who, why, what, where, when of it all. And my ongoing attempts to solve the mystery of "The Case of the Phantom Singer" are detailed in my Japanese liner notes accompanying the CD. For those of you who might be interested in reading the original English text, I've uploaded it at the following site.
http://carole-creveling.blogspot.com/
Posted by Bill Reed at 12:26 PM