A Tale of Two Kitzmillers 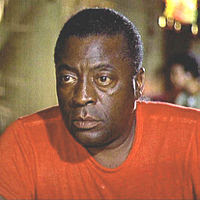 Sitting there, I suddenly flashed back to the 1950s and my misdirected juvenile belief that the John Kitzmiller, who was Marty Paich's tuba player, was also the very selfsame Kitzmiller who was a black American expat actor who'd begun his career appearing in Italian neorealist movies. Now, how hip is THAT?, I thought. Talk about covering the artistic waterfront! I wanted to be at least as versatile as that when I grew up.

Eventually, however, I began to realize that this was merely wishful thinking, when I learned that Kitzmiller, the musician, was married to jazz singer-pianist Jeri Southern. I could imagine her as the wife of a Marty Paich sideman. But married to an expatriate black actor who had shown up in Fellini movies? Nyah! Not even Jeri Southern was THAT hip.

I had a lot of weird misconceptions and scrambled epiphanies like that when I was but mere protplasm in Buster Brown Shoes. I wanted the world to be round, alas it turned out to be terribly square.
Posted by Bill Reed at 5:48 PM