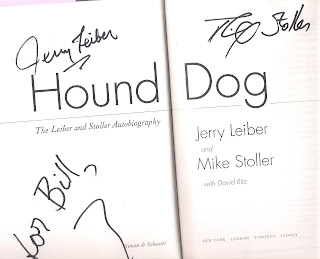 
I've just finished reading the wonderful (I'm leaning toward unqualifiedly GREAT) Hound Dog, an autobio (of sorts) of Jewish-verging-on-black songwriters Jerry Leiber and Mike Stoller, written in conjunction with amanuensis David Ritz. And "of sorts" because of its rather Wild Palms-ish construction, with Jerry and Mike trading anecdotal "fives" in an only slightly sequential fashion. Not just a book for lovers of rock and roll and r n' b, but for fanciers of any kind of musique (and that includes concrète).


Much of the early part of Hound Dog deals with the duo's childhood exposure---and immediate love at first sound---to the music of Black America. More than a little ironically I, in turn, was introduced to these sounds by the early work of Jewish "crossover" artists Leiber and Stoller, an experience that I dealt with in MY autbio, Early Plastic. To whit:


"After my father died, my mother, sister and I moved into a Charleston WV housing project: Washington Manor (almost universally pronounced by those who lived there, "May-nor"), a place I remember most especially for its racial lunacy. The apartment windows where whites lived faced out on the black section and, conversely, windows in the black section exclusively looked out on the outside white world. In the five years that we lived there, I never saw a single black face except from my window. The idea was to reinforce racism. On me it had just the opposite effect. I became deeply wrapped up in the notion of the "other."

Making matters even stranger was the official management policy of immediate expulsion from the projects at the merest hint of racial fraternization. One night when I could countenance the madness no longer, I awoke at two in the morning, slipped out of my pajamas and into my jeans, climbed over the fence dividing the two halves and defiantly stood, quaking, in the black part of the projects for several minutes before scurrying back home. The next day I spent half-waiting for some sort of axe to fall over my furtive symbolic gesture, but nothing ever came of my somnambulist experiment in, quite literally, crossing the color line.


But there was an Edenic side of living in the projects: music from the black block parties right outside my window. Strange, new (to me) sounds---radically different from anything played on white radio in the south or near south up until that time--- blaring out of the loudspeakers so deafeningly it rattled the pictures on the walls. I sometimes think I must have been the first white person, except for the records' producers, to have ever heard the likes of these songs sung by the likes of the Big Mama Thornton, The Clovers and The Coasters, et al. I immediately became an aficionado of this new music from, if not exactly another planet, another world; to the extent that I began patronizing Race Records---actually called that---located in the black Ferguson Hotel. What a figure I must have cut in the early-to-mid 1950s; a not­ quite-teenaged white kid in a black record shop, earnings from his paper route clutched in his hand, humming songs to an accommodating African-American clerk who spun the various 45's and 78's until we found the one for which I was looking.


Before long I also stumbled on the 50,000 watt clear channel station out of Nashville, WLAC, featuring deejays Gene Nobles and John R. Enacted after-hours and away from parental scrutiny, auditing WLAC was so clandestine and forbidden, that it operated like a vicarious trial run for sex---something that few teens in the 50s had partaken. Not in my set, anyway. In between their pitches for mail order rhythm and blues packages from Randy's Record Shop in Gallatin, Tennessee and salacious paeans to the lubricating properties of White Rose Petroleum Jelly, this powerhouse outlet blanketed almost the entire country with the real deal in black music instead of the pale white simulacrum coming to be known as rock and roll. Years later I learned that the jockeys on "LAC" ("a service of the Tennessee Life and Casualty Company") weren't actually black, but only "sounded that way." And I wasn't the only who got misled. Legend has it that no less than the Godfather of Soul himself, James Brown, showed up at the station late one summer evening with his first recording tucked under his arm hoping to get a break from men whom he had presumed for years were "Negro," until being led into the studio and learning otherwise. When the secret history of rock and roll is writ large, it will probably be made apparent that it wasn't really Dick Clark who turned on teenage America to black music, but instead, this seldom acknowledged radio phenomenon out of the heartland of America---WLAC.